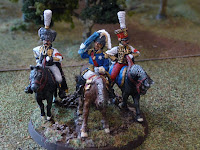 This is Marshal André Masséna, Prince of Essling, Duke of Rivoli with 2 ADC's. He was the officer commanding The French Army of Portugal. He was called back to Paris after losing the battle. The figure is a Redoubt which is a little unusual for me as most of figures are Front Rank or Foundry. He has his Marshall's baton and he is painted in what I think would be pretty standard dress for a French Marshall, unlike shall we say that worn by Marshall Murat.The 2 ADC's are Front Rank. It seems you can paint a French Napoleonic ADC what ever colour you like. I found this website which has numerous reproductions of the French soldier napoleonic uniforms, including multiple commanders and ADC's. The British ADC's are quite boring in comparison. 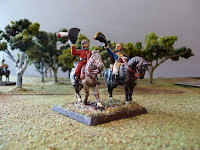 To the right is Major-General Louis Henri Loison with his ADC, these are Front Rank figures. He was the officer commanding the VI corps of The Army of Portugal. 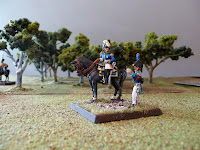 General de Division Jean-Gabriel Marchand commanding officer of the 2e Division in the VI Corps. The ADC is a Redoubt figure. There is not a whole lot of choice in standing ADC's. 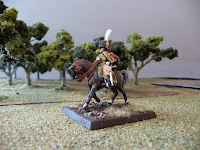 Brigadier General Louis Lepic, officer commanding the Imperial Guard Cavalry Brigade in the Army of the North under Marshall Bessières. This is a nicely sculpted Front Rank figure. I am not sure if General Lepic should be in a Hussar uniform, but it is what I had. He came up through the Guard Grenadiers. 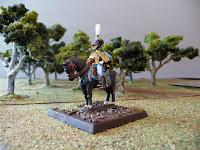 Brigadier General Etienne Lamotte, officer commanding the cavalry in the VI Corps. He is also a Front Rank figure. He is dressed here as an Hussar, but he came up from the 4th Dragoons. The total men in the cavalry brigade of the VIth corps was 334 men and officers.
Posted by john de terre neuve at 14:18