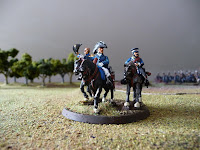 Lord Wellington and his 2 ADC's. These are Foundry figures, aside from the ADC that you can barely see who is from the Redoubt collection.  The Prussian looking ADC is inaccurate for May 1811 and probably belongs to the Battle of Waterloo era. 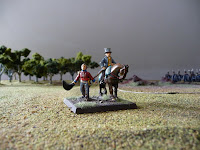 Major-General Sir Thomas Picton, officer commanding the 3rd Division. He is modeled here in mufti as his uniform got left behind, unfortunately this was during the Battle of Waterloo. All figure manufacturers (this is a Front Rank figure) seem to model Sir Thomas this way and he is a highly distinctive figure, so I thought I would overlook this historical inaccuracy. 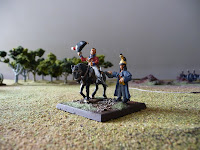 Brigadier-General Robert Craufurd, officer commanding the Light Division. This is a Foundry figure. Described by his fellow officer "as brilliant as some of the traits of his character were, and notwithstanding the good and generous feelings which often burst forth like a bright gleam of sunshine from behind a dark and heavy cloud, still there was a sullenness which seemed to brood in his innermost soul and generate passions which knew no bounds." (George Napier) 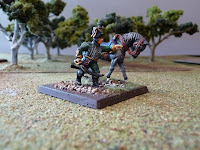 This Colonel Beckwith, officer commanding the 95th Rifles. He commanded the 1st brigade in Black Bob Crauford's Light Division in the Anglo Portuguese army under Wellington. This is also a front rank figure. I could not find a source for mounted British Rifles figure, but wanted to indicate that he was a brigade commander so posed him with a horse.  I got the idea from this website, I only wish I could paint that well.
Posted by john de terre neuve at 14:31