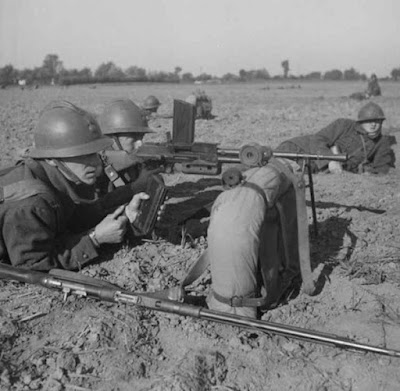 Tuesday night we got in our tenth and final game in the Gembloux Gap campaign, in my last post I said it will be 2-3 weeks before I get the terrain together but once I laid it out I felt I was ready to go. No railway stations and some variable walls but it looked ok once it was on the table. Again, Janne and Eero showed up for the game. I am not sure how they do it at 0200h their time, but they tell me it is quite exciting to watch and after watching most of the previous 9 games, I am sure they wanted to see the grande finale. 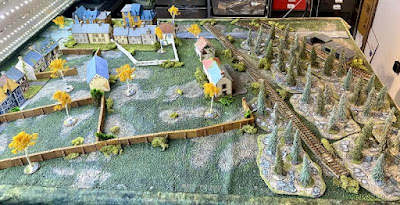 Dice were rolled and the game started:
Germans (FM 8 (-1 on FM roll) (3 Schützen Regiment)
Schützen Platoon #3 (less 1 man)
Supports (18)
Fifth Columnist
Red Dice
OT MMG
PGB
PzII
PzIV
Demo Team
French (FM 8) (-1 on FM roll)(110e Régiment d'Infanterie)
Infanterie Platoon #3 (less 5 men)
Supports (12)
Escouade de Fusiliers Motocycliste
Canon de 47mm ATG
PGB
Roadblock
Patrol Phase: As usual we played out the Patrol Phase on P-Y's ap. The smaller dots are the JOP's, while the numbered dots are the PM's at their final positions. The game was based on the Attack on an Objective scenario from the the main rulebook.  To win the game I have to exit 2 units off the western edge of the table. The French could win by expending 3 CoC dice and blowing the up the route. I was lucky and got 4 free moves, I was sort of expecting P-Y to place 1 forward JOP but he did not. I was fairly happy with my JOP's as I wanted to leave the impression that my attack was going to be along the road. 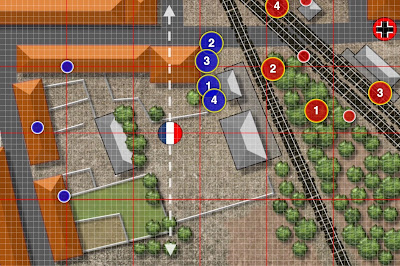 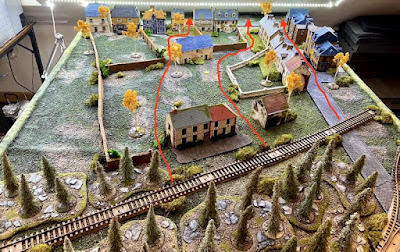 The German Plan: As you can see from above, I had 3 routes to get off the table. I had sense that P-Y would take a roadblock in this game so I did take a demo team but my main reason for taking it was to deploy the team early near the road to make it look like that was my plan. A lot was up in the air but I felt my best option was to advance unit towards all 3 escape at the same time while adjusting things on the fly as the French laid down their defenders. What do they say about "best laid plans"! I should note that P-Y placed the road bock about 12" from the French edge of the table.
Terrain Considerations: We decided to stick to the RAW as much as we could. High Walls prevent troops from firing from or to, they are major obstacles. Troops can toss grenades over them as well defined in the rules. We added that if troops are within 2" of a high wall they are shielded from fire from 2nd story windows. The Roadblock only impedes vehicle but does provide light cover.
The Action: The first throw of the dice fell to P-Y, I think he rolled a double phase but not a lot of use as the defender. We both had Pregame Barrages, so there was going to be some limitation in deploying but I was generally pretty lucky as was P-Y when he finally decided to deploy. I rapidly deployed the demo team, a SL and a squad south of the road and another squad north of the road, these were initially all out of LOS or in cover on Overwatch. I then placed the PzIV on the road. P-Y kept his powder dry and would not deploy. I sent the demo team just south of the road to make it look like they were heading to the road block. I had also placed my Off-table MMG on the road on the German edge. A very narrow focus of fire but it did cover the road. I felt that my 5's would be more useful firing the MMG than accumulated CoC dice. I was proved to be very wrong! Anyway onto some snaps.
So at this point it was time to make a rush for the west and German victory. P-Y had accumulated 2 CoC dice so was close to blowing the route giving him a French victory. Three German squads were deployed within 18" of victory but were all in the open. It was the French phase and it was time for P-Y to deploy his defenders! Again back to the photos.
So game over, this was one of the closest games I have played. The end of another campaign, so what is next......well I suspect we will end up in a jungle....where I am not sure yet, but stay tuned!
Posted by john de terre neuve at 09:22