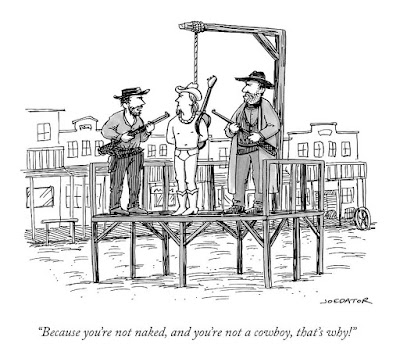 We had our next game in our What a Cowboy campaign 2 nights ago. This time we decided to play the rescue scenario in in a town. I hope you enjoy the cartoon above which I suspect is from the New Yorker magazine.
I have to admit that my Mexican Bandito posse is becoming pretty weak in comparison to the Sheriff's posse, starting to be really out-gunned. The loss of Blondie, my gunslinger, as really been a problem. Because of this, I felt that it was probably best to try to suffer no further attrition, while at the same time hoping to take out one of the sheriff's men. Time to play defence.
Mexican Banditos
Tuco-Legend-Outlaw-Adams Revolver, Colt 45-Deadeye, Stealthy, Shoulder Stock
Angel Eyes-Shootist-Ex-soldier-Wincester Carbine-Rifleman, Telescopic Sight, Spy Glass
Le Français-Greenhorn-Merchant-Colt 45-Slow
3-Fingered Julio-Miner-Colt 45
Sherriff's Posse
Robert "the Savage"Cain-Legend-Ex-Outlaw-Adams Revolver, Colt 45-Quick Draw, Ambidextrous, Shoulder Stock
Elmer "Two Lives Pratt-Gunslinger-Ex Outlaw-Winchester Carbine, Colt 45-Lucky
Moses "the Viper" Rivera -Shootist-Buffalo Hunter-Winchester Carbine
Herman "the Mute" Elliot-Greenhorn-Railway Worker-Colt 45, Sawn-off Shotgun-Tough
As usual, P-Y set up a beautiful table as you can see below. We played with Civilians for the first time, they added an interesting dynamic. I took an Ambush Point as my support, while P-Y took a Mobile Deployment Point. We both took 2 groups of Henchmen. In the rescue scenario the attacker (the sheriff) has to escort the doomed man off the table.
So with my plan to lie doggo until a good oportunity delivered itself. I set up my 4 characters so they would be all in range of the gallows but essentially out of line of sight. I had planned to use my 2 groups of henchmen as scouts and essentially bait to attract the Sheriff's posse out. P-Y essentially did the same thing losing his 2 groups of Henchmen before I lost mine, unfortunately 3-fingered Julio was also driven off the table in these engagements. I was able to also shock P-Y's shootist to a degree where he was in hiding until he recovered.
So we were now at a point in the game where there was a bit of a stalemate, P-Y decided to break it, bringing his Legend around on what essentially became his left flank. I had my shootist on the top veranda of the saloon with my legend on the bottom veranda. I had my remaining greenhorn across the street on the top veranda of the hotel.
P-Y's legend made a dash towards the top veranda of the saloon from it's rear. I felt I had both my defenders in good position, I interupted first with Tuco, he needed a move dice to get into position to shoot at "The Savage", I rolled no 1 or 6's. I was stymied. "The Savage" then climbed the stairs (I believe that P-Y generally rolled much better die than I did for most of the game), he shot at Angel Eyes, fortunately I was able to dodge although I was in the open and survived a Fall Test when I jumped off the veranda to the ground.
"The Savage" then retreated back down the steps and moved back to the main road so he and "Two Lives"could advance to rescue the doomed man. I decided to advance Tuco to their position with the hope to take one of them out, I rolled a 6 when I shot, but I had an "Every Gun Makes it's Own Tune". I had scored a critical on "Two Lives" with him in the open, but P-Y played the "When you Hear a Strange Sound, Drop to the Ground"....2+ on cover save. He dodged. The turn was over, I decided to withdraw ceding a victory to the Sheriff. It is only going to get tougher! 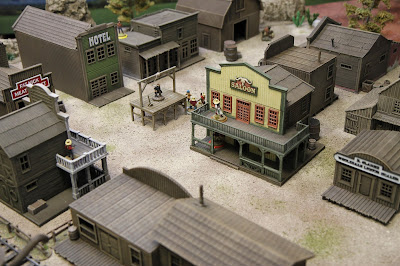 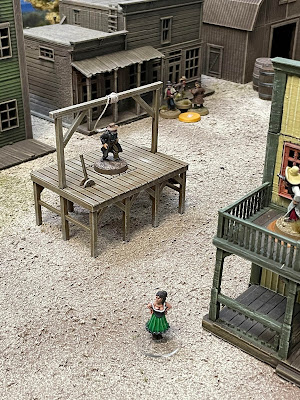 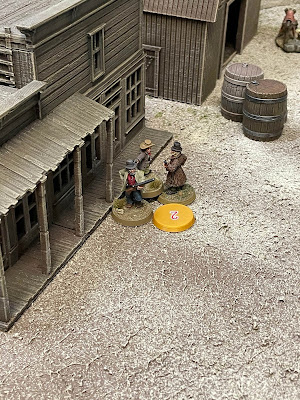 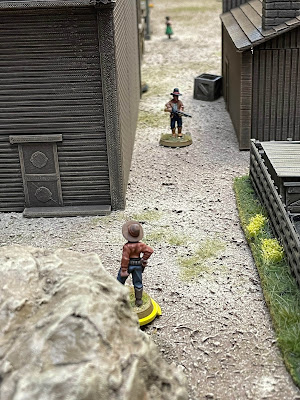 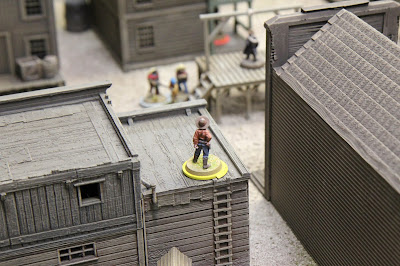 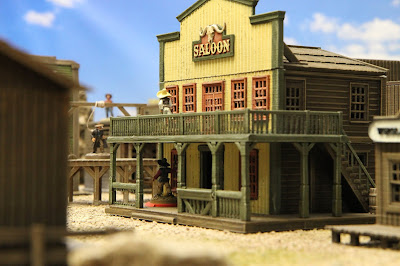 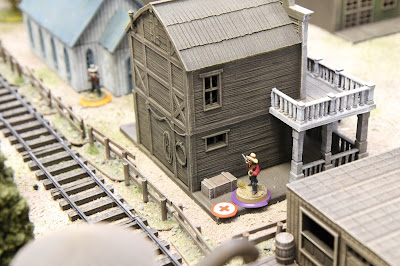 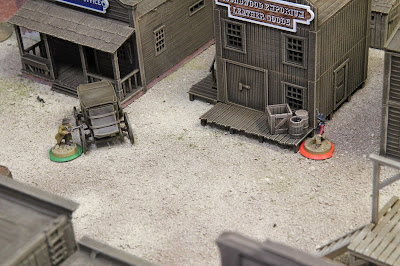 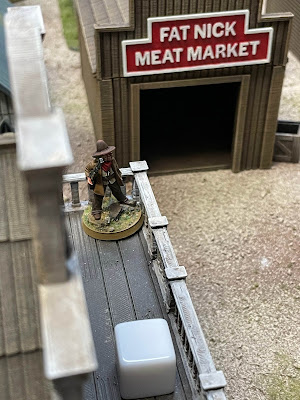 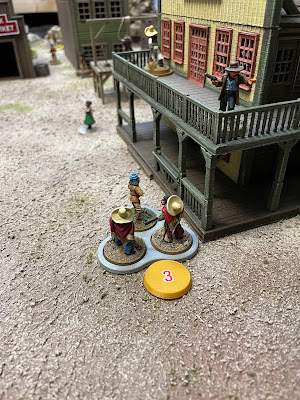 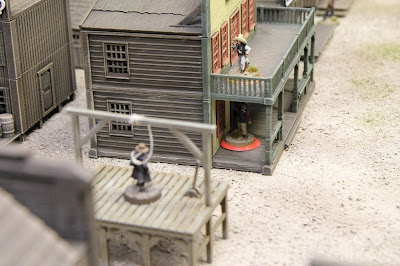 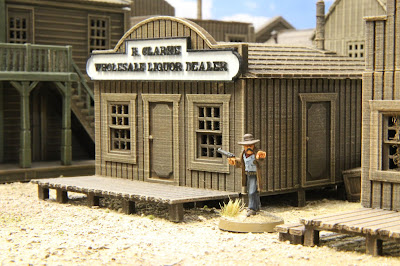 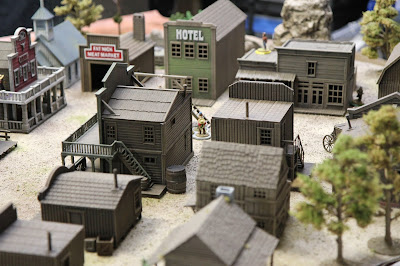 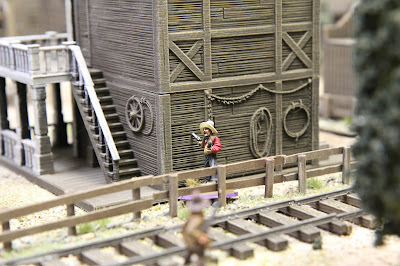 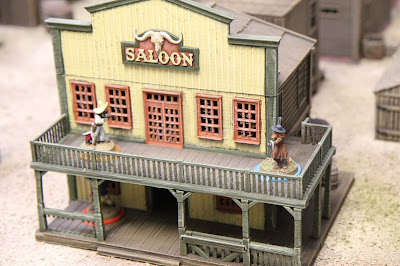 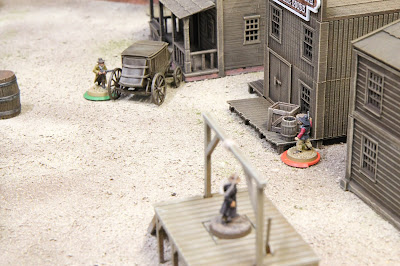