Death in the Hürtgenwald: A CoC Mini Campaign 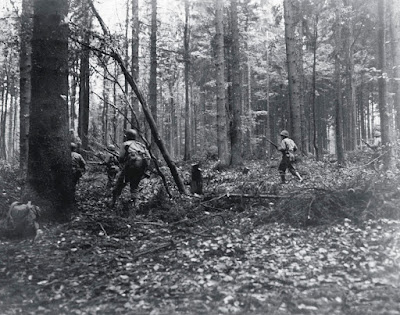 Yesterday Tom and myself got together to finally play the Achtung mini-campaign from the Summer 2017 TFL special. I had got to play part of the campaign that Tom presented last spring at Huzzah but it was not until now that we got a chance to play out the whole campaign. It was also the first time in several years that I got to play an actual CoC game with Tom. Tom introduced me to CoC when it first came out.

As usual we played at the Hobby Bunker, and got set up and started by about 1030h and finished at around 1730h with a brief break for lunch, making this the longest gaming session I have ever played.  We got in 2 campaign turns and although we did not finish the campaign completely we came to what I believe was a fair conclusion.

The scenario pits an American infantry platoon against a German platoon that has occupied two WWI era bunkers in the Hürtgenwald. The scenario is played as a mini-campaign as it would be quite difficult for the Americans to take both bunkers in one go. Each time the American re-set the game they suffer a -1 to their Force Morale. You can purchase the scenario here for the price of a pint! I have taken the liberty of taking the terrain image from the booklet as follows. 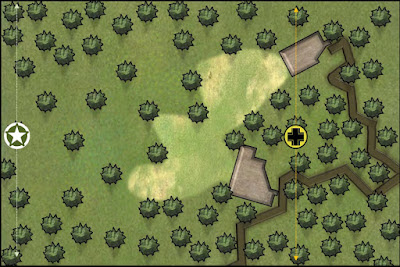 Tom did a great job with the terrain as you can see.

American Forces (Starting FM 8)
Core
SL x2 w/ Carbine & SMG
Bazooka Team
3 Infantry squads w/SMG armed JL, BAR Team w/ 2 M1 riflemen and a 8 man M1 Rifle Team
Supports
FO
Pregame Barrage
Sniper
1 Wire Cutting Team
2 Mine Clearing Teams
Summary of First Game
Once the first minefield was removed, I felt it best to withdraw in order to re-assemble my forces. I had started to suffer significant casualties (13 men and a JL) and my FM had dropped to 3 and I had only 3 Command Dice. My plan for the 2nd attack was to quickly take out the second minefield and than outflank the Germans on their right, thus gaining access to the smaller bunker and so on.

I had taken a pregame barrage as one of my supports in the first game but unfortunately threw a treble6 very early on thus making this of no use. I also had not got to deploy my wire cutting team. The Americans have only 12 supports to the Germans 20, I felt I had not enough heavy firepower down the centre, so as you can see I had to reconsider my support options as reflected below for the 2nd game. I had also permanently lost 7 men and had 4 not to return for the 2nd game. The Germans has essentially lost no men.

Of course now the battle became quite heated, so I forgot to take many photos and I missed taking any at the end of the game.  We had now been playing for 5 hours so I hope to be forgiven! I should also note that according to the scenario rules the same JOP's were used, so there was no Patrol Phase.

Summary of Second Game
The Americans end up with a partial victory having taken 1 bunker, but by now almost 6 hours had passed and I think we were pretty done. The American plan had gone pretty well and I think if we had played a 3rd turn, I might have been able to take the second bunker.

If I had my time back I would have taken different supports in the 1st game. I should have take an engineering squad rather than 3 Engineering teams. The sniper although deployed really did not help and by serendipity the choice of a pregame barrage was of no value.

I believe I made the good choices in the 2nd game but again an Engineering squad with mine clearing and demolition teams would have been more valuable as the demolition team comes supplied with Satchel charges. The Sherman was quite useful as was the pregame barrage.

All in all, though it was enormous fun. Tom is a lot of fun to play with it and he supplied a great terrain and game.
Posted by john de terre neuve at 11:04