A Plunge into the Dark 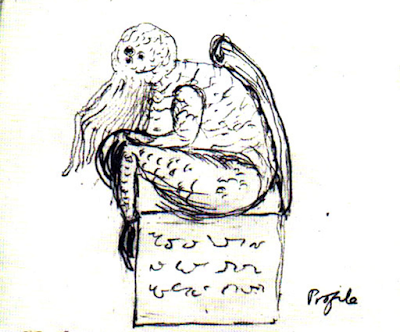 I have decided over the last couple of years to take the opportunity afforded by the AHPC to do something different. Last year saw my foray into a 6mm miniatures with a Blood Angels Epic army. This was quite novel for me as I had never painted any 6 mm models nor had been involved in anything to do with Fantasy wargaming. For this year's Challenge, an unusual series of events and observations sent me down a path I would have never predicted.

This past fall found me with far fewer wargaming opportunities than had previously been the case. What was I do? Through a Kickstarter a Boardgame had landed in my lap. I gave it a go and discovered that boardgaming was a possibility but at the same time it was still a challenge to play solo. Somewhere along the way, I believe Curt mentioned that there were Boardgames out there where the story line was driven by a computer programme. In fact he had recently painted some figures for a same said game.

So I bought Mansions of Madness. I had heard of HP Lovecraft but had never read him and the Cthulthu Mythos was unknown to me, although I had wondered what it was. I like main stream Science Fiction but had never really been into the horror genre aside from maybe Steven King and TED Klein. I set up a game and found it quite interesting and fun to play and as a bonus one day my wife and sister-in-law were watching me play and quickly got talked in to having a go. They were immediately drawn in by the character profiles of the Investigators in the game. At the end of a 2 hour session, they both said when are we going to play again!

Being obsessive, I really could not play with unpainted figures, so I set about painting them. A further conversation with Curt gave me the idea that it might be interesting to paint the Investigators in polychrome while painting the Monsters in a monochrome. But while putting the project together, I started to ask myself who was HP Lovecraft? 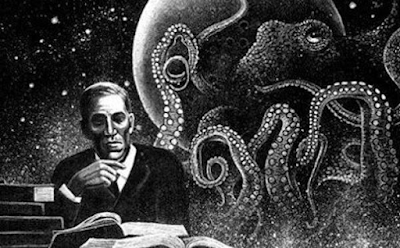 Well I suppose this is where I started to lose control of myself. Reading about him certainly revealed a somewhat unusual character; both parents going mad and dying in asylums, riches to rags, and a quite extraordinary fan base. His books are out of copyright, so Kindle versions are easily obtained. I read The Dunwich Horror, a strange story and I liked the writing style. But what was this Cthulhu Mythos. While researching this, I discovered that many of his stories have spoken versions and are easily available without cost. I discovered HorrorBabble and I was hooked.

I suspect in the last two months I have listened to maybe 20 of HP Lovecraft's short stories and novellas over and over again! At the Mountains of Madness is my favourite, but close behind is The Shadow over Innsmouth and of course The Call of the Cthulhu. I suppose it does not help that I live in Salem, Massachusetts, the dead centre of Lovecraft Country. 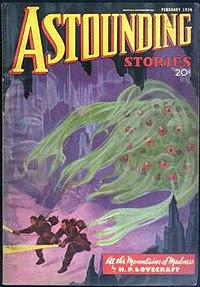 This immersion has also sparked an interest in 1930 and 40's pulp magazine cover art. I am going to have to stop myself from starting a collection. 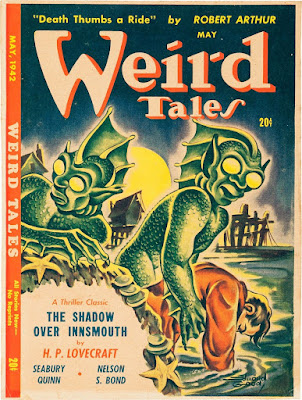 I could go on and on, but I should stop. If you would like to take the plunge, here is a link to my YouTube playlists of HP Lovecraft stories.

Anyway, please excuse my ramblings, time to get back to the challenge! Below find the start of my Mansions of Madness figure collection. The figures are mostly semi-hard plastic, the faces are somewhat soft but generally I enjoyed painting them. The polychrome Investigators were easy enough to paint but I am not really sure if you can call my Monsters true greyscale, so I decided to use the term monochrome. The black background is a real challenge to get right. I have photographed all the figure 3-4 times. I initially tried my iPhone 8 but I just could not get it right. I then went back to my Cannon and in iPhoto I was able to adjust the background (make it black) using the blackpoint adjustment without destroying the image. Still not an hundred percent but improving.

The Investigators
The Monsters
Well another year's challenge has gone by: Many thanks to Curt and a very patient Sarah. Also thanks to my minion Ray as well as all the other helpers. And finally congratulations to all the participants, each year the submissions are just more and more brilliant.