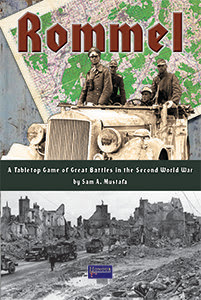 I have been interested in gaming the North African theatre of WWII for several years. A previous attempt was unsuccessful and I ended up selling the 15mm DAK and 8th Army forces I had assembled. I felt that anything but a grand tactical game just did not duplicate the battles fought in the desert as I had imagined.

Then along came Rommel a ruleset by Sam Mustafa that was solely aimed at this level of wargaming.   I have been gaming WWII at the skirmish level using Chain of Command and enjoying it greatly but felt the WWII North African battles just did not lend themselves to skirmish gaming. I have played several games by Sam and enjoyed them including Lasalle and Longstreet. I assembled an army for Blucher but just could not get interested and sold them. Coming from the Sharpe tradition of Napoleonics, grand-tactical wargaming just did not attract me.

Anyway I was excited and by this time I had 10 years of wargaming under my belt and this experience had provided me with better tools on how to plan things. As my wargaming armies have expanded, storage and transport have become critical. It was interesting to watch other gamers plan their armies for Rommel. I could, of course, use my 20mm figures of which I have an extensive collection (but of course not in desert livery), but that was just unattractive to me.

After having a look I decided it had to be microscale, either 2, 3 or 6 mm. I wanted to be able to recognize things so I decided to go with 6mm or 1/285 scale. GHQ and CinC are the main manufacturers in the 1/285 scale. The other 6mm manufacturers are a little smaller at 1/300 scale, but I understood although GHQ are quite expensive at $2.40 per unit, they had the best selection. I could ameliorate this by using CinC models which are priced at $1.40 per unit. Their range is much less but they have the basics especially trucks of which I require a great number.

Next up was basing. I use a 6x4' table and this appears to be the standard for Rommel with 6" squares (Rommel uses a grid system of movement). I could of gone with 4" squares but I felt with 6mm models this would limit the base size significantly and thus the number of models with which I could populate each base. After a lot of thought and discussion on the Honour Forum, I decided to go with 70x45mm bases as three (the limit in the ruleset) could fit in a 6" grid. For transport and aesthetic reasons I am now going with metal bases for all my armies. I am just not attracted to basing with a high profile, they just look to me like playing pieces rather then actual troops and vehicles.

I had to decide how to populate each base. This was limited mostly by what could fit and the cost of the vehicles. I also had to represent the 5 basic types of unit that can be represented in the game. There is armour, armoured infantry, motorised infantry, legged infantry as well as artillery. The big plus for me is that in WWII North Africa aside from the Italians most infantry was motorised so I did not have to worry about painting many 6mm infantry which for me would be a real drag.

Each base in Rommel is the equivalent of a company and in most cases aside from artillery each battalion has 3 bases. I decided to go with was the following scheme of basing:


This makes it very easy to identify what each base represents at a distance. As mentioned in my previous post, I have gone with a wood filler to terrain the base. I felt that sand was wrong at this scale, and the bases were painted successively with Burnt Sienna, Yellow Oxide and White tinged with a Yellow Oxide drybrush. The vehicles were fixed to the base using a gel superglue. It is expensive, but I like the control I get.

I had to decide if and how I was going to label each base with it's stats. I am by nature a non labeler, but I really could not see how to get away without labels. I really did not want dice or markers on a grand tactical battle field. I decided to go with a 60 weight card and use earth colours. I felt this was much less jarring than white. I use different colours for different armies. I felt that it was important to include the Kampfgruppe, the attrition track as well as the armour rating if any. Artillery were a little different as noted below. The labels are attached with tiny dabs of superglue gel so are very easily removed in order to change KGr or armour rating. I decided the type of tank was unnecessary to include, as this whole process has educated me in tank recognition immensely!

The final step was how to mark the attrition track. Attrition in Rommel can move up and down, troops can recover, so I had to find something that was temporary. Here I had an Eureka moment, the bases were metal............I could use magnets that can easily move in any direction.

I believe I have done 85 bases so far. I decided to start with getting the troops together so I could playtest the rules. A scenario was provided on the Honour website for Operation Brevity, but I have already gone well beyond that. More about that in my next post.

Finally, I should say that this has been one of the most exciting projects I have started. It has kept me completely engaged for the last 3 months. It has been enormous fun.
Posted by john de terre neuve at 09:50