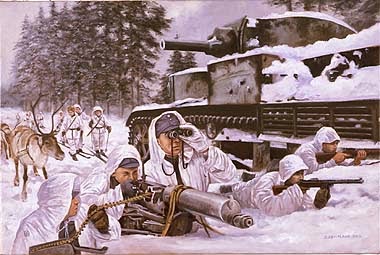 After a year of preparation and two false starts, I finally got my Winter War Campaign off the ground yesterday at the Hobby Bunker. It is funny that when I look back the easy work was painting the figures and getting the terrain together, the really tough work is campaign design. I really have to admire the work put in by Rich Clarke in his "Pint-Sized Campaigns". Not only do you have to have a grasp of history but you have to be able to design an interesting campaign.

After reading around the Winter War, I decided that Battle of the Raate Road would best lend itself to a short but interesting campaign for Chain of Command using the At The Sharp Edge campaign supplement. Here we have a 5 day battle fought over a relatively small area between two very asymmetric and different forces under very adverse conditions.

Being a relatively novice WWII gamer, I felt it best to stick as close as possible to the army lists and the campaign supplement as available from Too Fat Lardies. For the first two months of the Winter War the Soviets are rated as green and the Finns elite. This pits a large force of 62 men against a small force of 36 men, with the large force having a +9 advantage in supports. Sounds good but when it came down to it, it was an uninteresting experience for the Soviet player as he has lots of men but very little command ability and very few tactical options. Historically correct maybe but boring to play.

The Too Fat Lardies games have an excellent cadre of players so as usual I referred my problem to the User Forum. After some discussion, I have made some modifications to my original plan to hope for a more interesting campaign. I plan to put together a pdf of the campaign when it is completed, but the general outline is as below.

Finnish CO Orders: You lead an elite Jããkiri platoon. Advance north to find where the Soviets are concentrated, then skirt along the Raate Road east 20 km to the Soviet command post at the Raate Border Station, attack the border station and kill General Viogradov, commander of the Soviet 44th Rifle Division. Along the way hary the Soviets forces.

Soviet CO Orders: You command a green force of Ukrainian recruits. General Viogradov has ordered the 44th Rifle Division to retreat back to the Finnish-Soviet border along the Raate Road. Your specific platoon has been ordered to provide rearguard action as the division retreats. Make your way to the border where you will join up with the 3rd NKVD Border Regiment.

Terrain: No normal terrain. For Infantry, the road itself and it's edge is Broken Ground, the Forests, Hills, Lakes and Exposed Ground  with Scrub is Heavy Going while the Snow is Really Heavy Going. All Vehicles are confined to the Ice Road.

On to the first scenario "Find the 44th". This was played as in scenario 2 except that we played it along the long axis rather then the short. Unfortunately we did miss that Mike (the Soviets) was supposed to get two free entrenchments, we did count the game but I decided to give him a fresh platoon for the second game. I as the attacker threw a 6 for support, so I got 6 supports and Mike got 15. I took an captured Soviet LMG for one of my LMG team, a Maxim HMG Team, as well as a Satchel Charge. Mike took one entrenchment, a Commissar, a Maxim HMG Team as Well as a BT7 Tank, he may have had more but that is what I saw. The Finns had a starting Morale of 11 and the Soviets 8. On to the Patrol phase.......


So our first game was a Soviet rout, as their morale fell to zero before they could withdraw. Certainly we identified that as set up this is a somewhat uninteresting game from the Soviet perspective, which I hope will be corrected by increasing the Soviets Command Dice to five. Mike was unlucky though, he only lost 21 men, but every time one of his squads had a kill on it, his test for wounding a leader failed and he had to take multiple morale tests which brought him down to zero in a little over two hours. Let's hope the next game is more interesting. 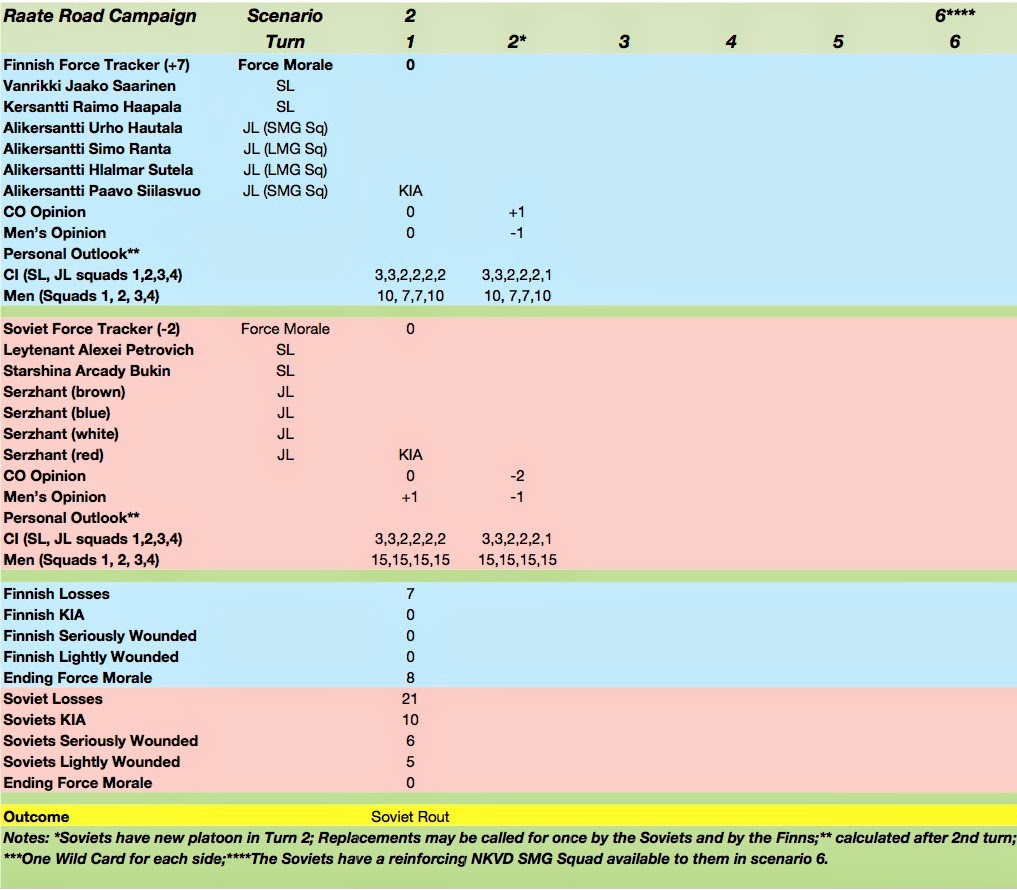