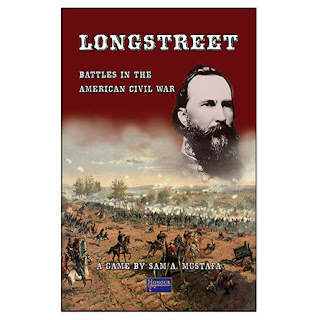 I met with Adam last night at the Hobby Bunker, he suggested that we have a go at Longstreet, Sam Mustafa's Civil War ruleset. Now, I know nothing about the war between the states, but I was quite curious about this ruleset as the activation is driven by cards.

When the ruleset came out I initially presumed that the turn sequence was card driven, as with Field of Battle, Musket and Tomahawks or Le Feu Sacre. When I found out the game was still an IGO/UGO set my interest waned. I am not a real big fan of IGOUGO, the TooFatLardies commercial for I Ain't Been Shot Mum sums it up perfectly for me.

Notwithstanding this, I am always interested to try something new, so off to Malden I drove. Well I had a great time and it is a very engaging game. The turns are alternate, but with your hand of cards you really have a lot of exciting options. There were cards to modify Movement, Firing and Combat as well as cards that allow you to interrupt your opponent's turn. the cards can also modify the number of hits that your units take, but the really cool thing is that using your cards up can also hasten your defeat.

So essentially we played an 1863 scenario from the rulebook with a large brigade aside. I took the Union side and Adam had a Texas brigade. We both had varied infantry, a regiment of cavalry as well as some cannon. I had skimmed through the Lite version of the rules that is available for free, the mechanisms are generally similar to Lasalle, so it was easy enough to pick up.

Essentially my chappies had to defend the crossroad that you can see in the photo. The Texas rebels are in the foreground. Adam has already put a AAR on his blog. It was especially nice not to have to bring anything, as Adam set up the whole game himself. Many thanks to him for a great night. Definitely will play this ruleset again.

Well now just two days to the start of the great painting contest, but hopefully before that I will post some photos and a brief AAR from our Chain of Command game from last Saturday.
Posted by john de terre neuve at 11:02