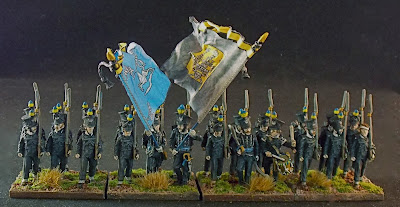 Up next is the 3rd Brunswick line. They fielded 691 men under Major Von Normann at Waterloo. Again these are Perry figures, but this time primed black with subsequent dry brushing of Dark Prussian Blue followed by London Grey, both from the VMC range. My airbrush compressor broke, so no black ink this time. 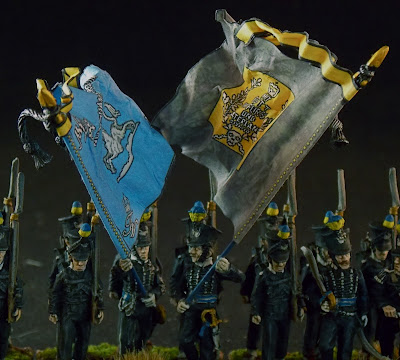 Here we can see the detail on the superb Flagdude standards, just fantastic. Hard to obtain, but well worth the effort. I have painted 7 units of Brunswick to date and these are the first unit to get a standard, I had to be patient.

I was particularly looking forward to painting this line unit as they have white facings, beautiful combination black and white! 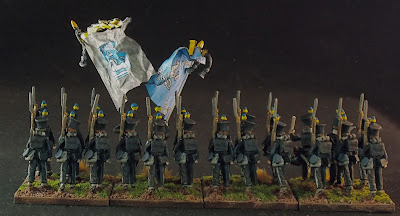 There is a bit of a fly in the ointment, I suspect now that all the figures in my Brunswick Corps are re-casts. I just feel awful about this, not because they are poor figures (they are actually fine), but more so because I feel I have cheated the Perry brothers. I bought them off TMP, I suspect the individual, who went by the nom de cheat of Warmbeaches, sold thousands of Perry, Front Rank and Calpe recasts. This was discovered about a year ago if I remember correctly. I suppose there is not much I could do as I had already painted 6 units, that is a lot of work, I just could not throw them in the bin. So after thinking about it for several months, I have decided to paint the last 3 units. As it is, I have only 24 more Brunswick recasts left so I need to order 24 more to complete the Corps, these will come directly from the Perry's. Damn your eyes Warmbeaches.

Anyway enough of that, I am off to Montreal today, playing a game of Lasalle on Friday, looking much forward to it.
Posted by john de terre neuve at 09:10