I have been really slow to photograph figures, mostly I think because I find it a real challenge to take good photos. I have a new camera, but you have to know how to use it. I have learned to recognise what some of the problems are, but am still working on it. I would love to get to a point where I just have to crop the photos and do nothing else. I did buy some daylight bulbs and usually use two swan neck lamps with as much ambient light as possible. My gaming table is just under 3 skylights so ambient light is usually not a problem. I actually had to increase the contrast in these photos as they were too light. I always appreciate any comments on how to improve. A few months ago Curt of Analogue Hobbies explained to me the problems I was having with the temperature, it was just an enormous help.

Anyway, I have finished both sides for a Dux Britanniarum. The final figures needed were 18 Romano-British Numeri, who are the levy fighters. This completes the 44 figure starter army. All figures are from Gripping Beast. They are nice enough, but after painting these as well as the Gripping Beast Vikings, Saxons and Skraelings, as well as 4 units of SAGA hired mercenaries, I am getting a little done with the Dark Ages. 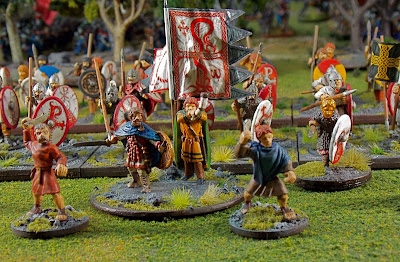 Well this brings my adventure in painting Dark Ages figures close to a finish. I have 8 more SAGA mercenaries to paint as well as 8 Anglo-Saxon slingers. Once done, I will be able to field 6 point SAGA Skraelings, Vikings, Anglo-Saxon and Andalusian Warbands modified as need be by 4 mercenary units. With some duplication, I can also field both Romano-British and Saxon forces to start a Dux Britanniarum campaign.