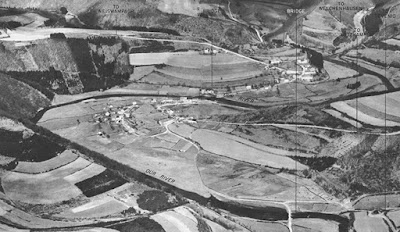 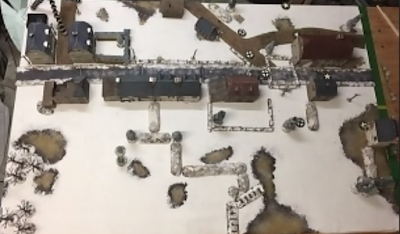 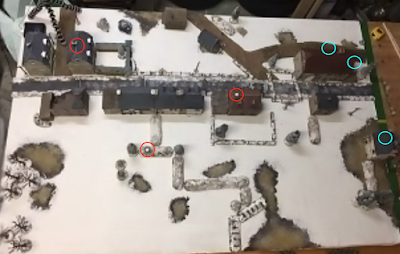 I am finding it very difficult to get a good patrol phase in any of these games because the Americans have got 2-3 free moves as the defenders as a part of the scenario design. Really can not advance at all before I am shut down. But not much use whining. 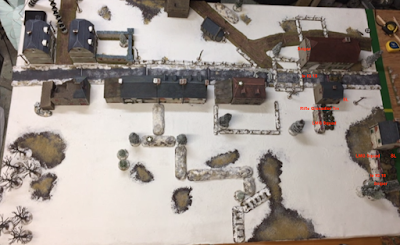 So this was somewhat of an unusual game. As you can see above, I had all my units deployed.....on Overwatch before one American unit deployed. Phase after phase went by, no change, I had 4 CoC dice and P-Y had almost 4. I just do not have the patience that P-Y has so on my next double phase, I jumped the LMG behind the centre hedge over and decided to try to move forward towards the road to try to capture one of the houses to use as a base of advance. See below. 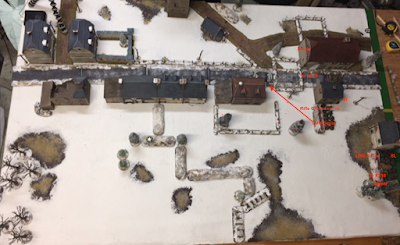 The game then got interesting. P-Y decided to ambush with his MMG team into the entrenchment that was on the road. I interrupted him and was able to take out 3 crewman. He fired back, I was in the open, took a few hits, lost a man or 2 and some shock but was still good to go as I was not pinned yet. I opened up with my le IG18 on the road, no effect. The game then entered an extremely aggressive stage on both sides. P-Y deployed a Rifle Squad into charge range but I interrupted again by retreating, I needed only 6" to get behind the house in safety. I rolled a 1,1,2. I was done for, and my squad routed, but they were a support squad so only took 1 FM hit. But by now all Overwatch's were gone and P-Y got a double phase at a critical moment. He was able to wound my SL twice and kill my Rifle Grenadier team, my morale dropped to 3, I withdrew. I actually only lost a 3 core men in this battle as well as a support LMG team, but I had to add in the results of my previous battle as this was a Blitzkrieg.
The Summing Up: Battle 9 /Turn 6
The Americans have now lost 10 core men on Table 3  as well as 4 men from their support infantry teams and 2 men from their Bofors.
Sturm Platoon #4: 9 dead, 6 wounded.
Campaign Tracker
Germans
Men's Opinion -8 (-2FM)
Overall Commander Outlook Secure
Americans
Not tracked
Not looking good, the best FM I can have now is an 8, very unlikely to move first in any further games, CR of SL is 6". I still have the opportunity to attack another Table in Turn 6, it will be table 6 with Sturm Platoon #2. 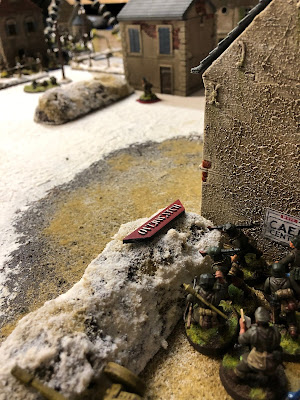