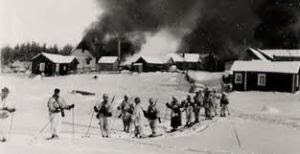 Myself and Curt from Analogue Hobbies got together last Friday for a Virtual Wargaming session. This was much anticipated by myself as I had not seen Curt in person for, I believe, around 5 years, and I was looking forward to catching up.
As Curt has quite an active blog, I have a sense of what he is playing or not and although I suspect he has played a lot of Chain of Command, I felt he had not played for awhile. I also wanted to test how a 4 Command Dice platoon would fend with a 5+1 Command Dice platoon. Of course, I am talking about the Winter War between the Finland and the Soviet Union in late 1939-to early 1940. There are official lists for this conflict but the forces are quite asymmetric as is the case, especially in the first 5 weeks of the Winter War. So after a lot of back and forth online in Chain of Command internet groups, with Rich Clarke online and person, and Eero Jurhola and other gamers in Finland, I had decided to give a 4 CD Soviet force a go.
I had written 4 of 6 planned scenarios for my planned semi-historical Raate Road CoC campaign. For my game with Curt, I wrote a 5th scenario detailing the initial attack of the Soviets on the village of Suomussalmi in the first week of December, 1939. At this point of the war, the Finns had only 1 battalion in the whole sector. The Soviets had invaded with a complete Rifle Division. 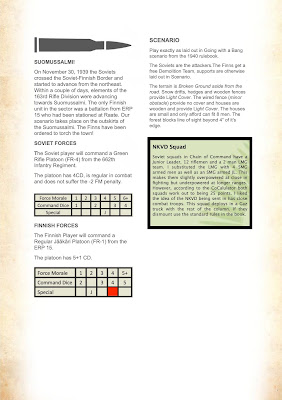 As seen in the description, we used the Going with a Bang scenario from the CoC Blitzkrieg source book. I would of liked to have designed some specific demolition rules where the Finns use petrol bombs to destroy the 2 buildings but I just did not have the time (I played 4 CoC games last week). I went with the basic rules from the Blitzkrieg book. On to some photos.
I did not do a great job of taking organised photos, but essentially the Finns had to torch one large building by their base line and one small building in the middle of the table. Curt placed almost all his men down quickly aside from his 2nd demo team and his 4th rifle squad. I started the Soviets off the north edge by placing the NKVD squad with the flame thrower team. They were to advance around the hill to assault the house just short of the hill.
The Finns quickly started to set their demands charge by the small house, they had the charge set quickly but were limited by the fact that they needed a CoC dice to set it off. They also placed 2 LMG squads as well as their MMG team along the hedge line to the south. I was able to get another rifle squad advanced up to the forest in the centre of the table with a double phase (yes you can get double phases with 4CD). By now Curt had a CoC dice and was able to blow the small house, 1/3 of the way to victory.
By now we were trading shots from my troops in the forest as well as from the 3rd squad I placed on the eastern edge of the table. Curt had placed his 3rd infantry squad behind the house to the north of the road, I advanced my NKVD and my Flamethrower team to the forest edge, they took some fir but were good. The Flame team let go and took out a few Finns, The NKVD then assaulted the Finns that were left behind the fence and by their SMG superiority they able to wipe out the Finns, but took significant attrition themselves. Both sides FM was dropping.
Curt now realised that he should of put one of his JOP's to the rear of his line as he had to run the 2nd demo team back to get to the 2nd house (this is the only mistake he made), they got stuck so his valiant 2IC ran down the road to get them to run and to remove some shock, he was successful but got shot in the leg and fell to the road.
The Finns now deployed their last infantry squad directly into combat with the remaining NKVD troops in the open, the Soviets got wiped out. At the same time the 2nd Finnish demo team had set their charge and rand back, the plunger was pushed......and the fuse failed. They had to go back to the house and reset the charge!
Both sides FM was now teetering near the brink, the Finns had 4 CD while the Soviets had 2. The Finns quickly reset the charge, they had a CoC dice....kaboom game over! 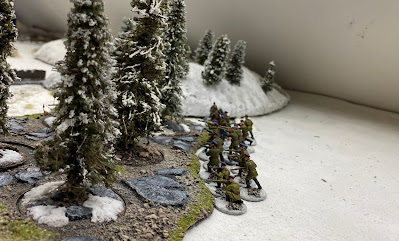 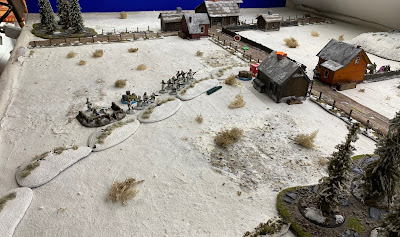 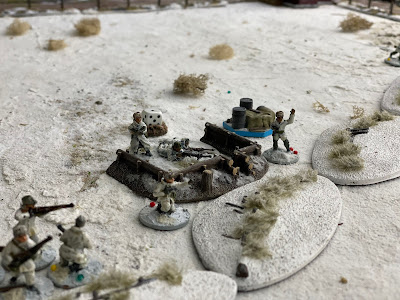 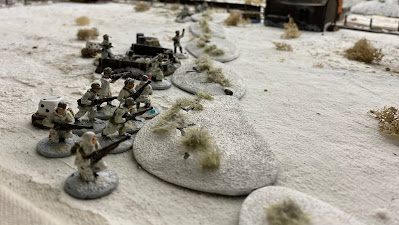 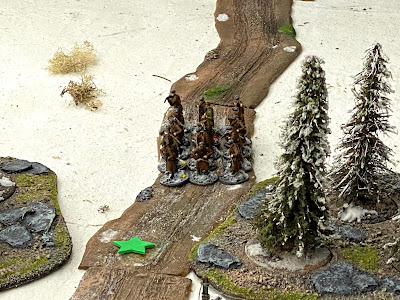 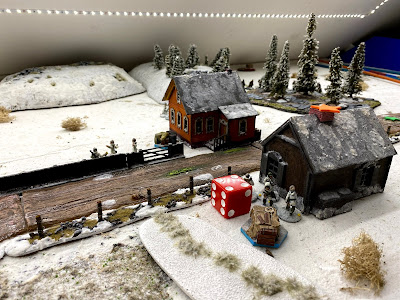 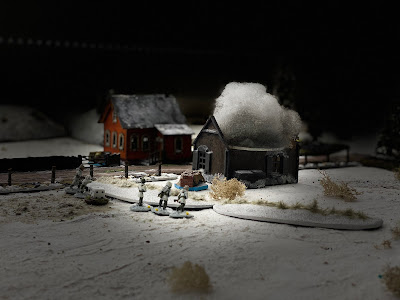 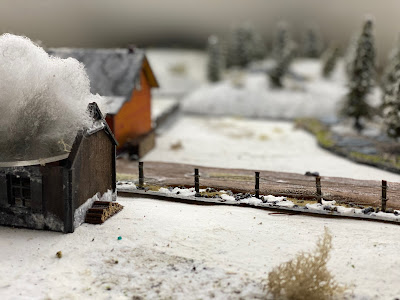 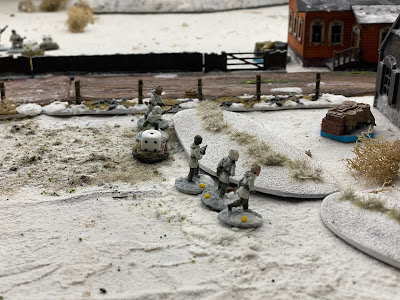 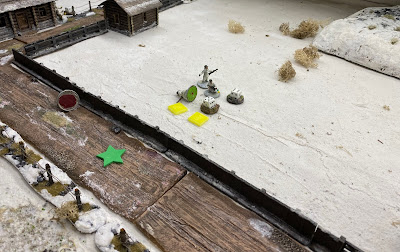 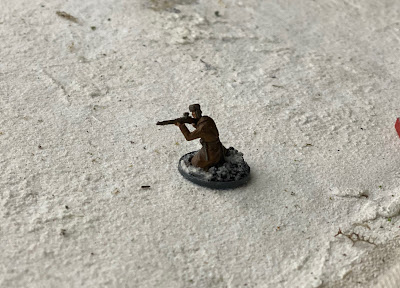 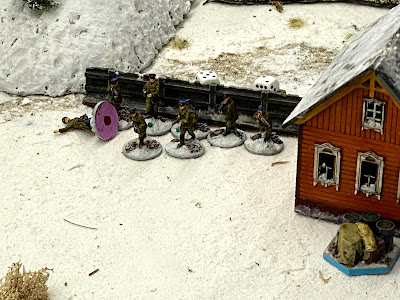 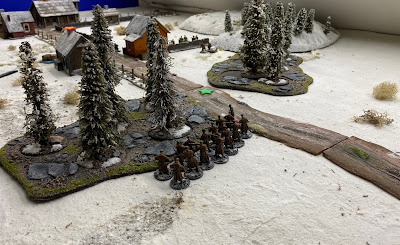 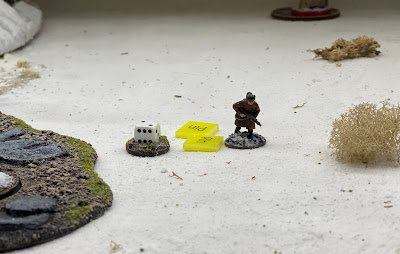 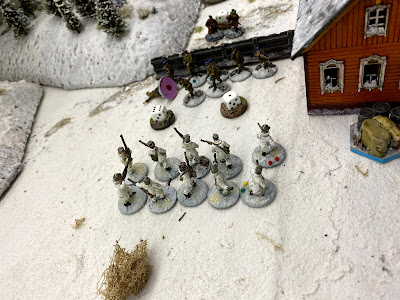 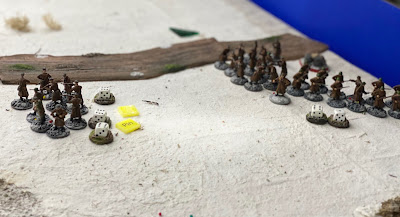 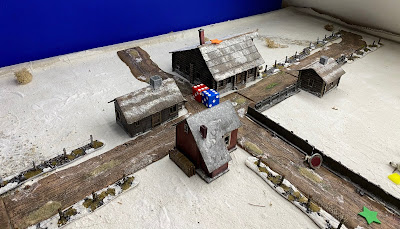 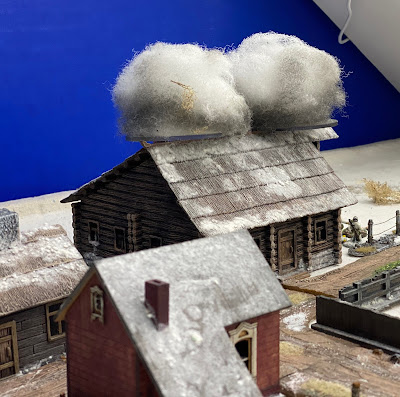 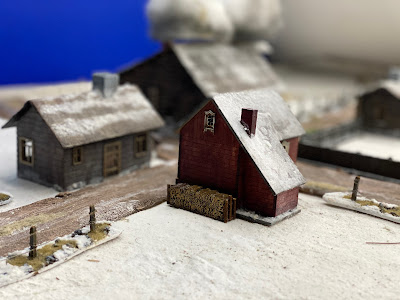 It was great to see Curt again and get in a game. But it was back and forth for sure. A well earned Finnish victory, it was closer than I though it would be. I still have to think about how to rate the Soviets, but the Finns as regular with a red dice seems to be good. Should I add a red dice to the Soviets, is it OK to treat them as regular in combat? Giving them a -2 on FM throw could be crippling. But the scenario it self was good and I am hoping Curt had fun, I sure we will meet again virtually soon.
Posted by john de terre neuve at 12:28