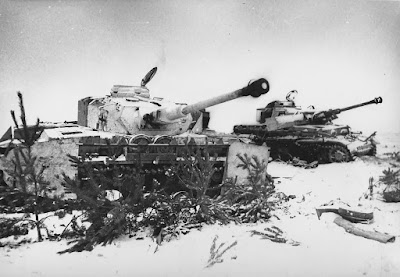 Yesterday morning we played the next game in our Bloody Bucket campaign. After taking Holzthum Village with their force intact, the Germans decided to Blitzkrieg Consthum Village, the next objective on their way to Bastogne. Both sides had full platoons.
Sturm Platoon #5
CD 5 Green FM 8
1 SL (CR reduced to 6")
3 man rifle grenadier team
2 Sturm Squads w/JL
1 LMG Squad w/JL
Supports (22)
Pregame Barrage (2)
Panther w/SL (12)
le. iG.18 (4)
MMG Team (4)
American Rifle Platoon
CD 5 Regular FM 11
2 SL's w/ Bazooka Team
3 Rifle Squads w/JL
Supports (?)
2 Minefields
Entrenchment
0.3cal MMG team
Sniper
The Game
Since the German FM has been forced down to 8 because Unterfeldweld Johann is now known as "The Butcher", the Americans got to move first. They diced up 2 free moves, so they got 3 moves with their PM's before I even had a look in. You can see the result below with both the position of the PMs as well as the JOP's. 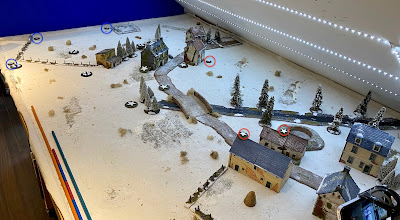 I would have liked to get a little further north and east (you are looking west in the above photo), I was also a little alarmed that the American had got a JOP so far forward but I did notice the P-Y had placed the 2 JOP's in the foreground very close together. Of course, I was attacking from the south and as there were no roads to the south I could enter anywhere on the that edge with my Panther. We had diced up the terrain conditions at the start of the game and fortunately the ground was frozen so no limitation on movement which of course favours the attacking player.
The game did not start off that well for me, as P-Y got multiple double phases and then threw a quadruple 6, getting a free CoC dice. Fortunately, the random event this time was a barrage in the northeast quadrant which affected no one this early in the game. He did place 1 platoon in the house in his forward position. I waited until I finally got a double phase when he was not on overwatch and placed my Panther to the southeast and a le.IG18 in the west with a Sturm squad. I hate placing units in the open but I really had no cover anywhere and P-Y was already well ahead of me in CoC dice. He held off using his squad in the building so I could not fire at them as I was too far away to see them. I felt it was now time to move the game along so I deployed my Rifle Grenadier team in an attempt to force the Americans to reveal themselves which they had to do as they would get overrun. I was now able to bombarding the house with 3 units; the Panther, the IG Team as well as the Sturm squad.
P-Y was now up to 2 CoC dice while I did not have one, but I was lucky with my firing and wounded a SL he had to deploy in the house. to remove shock. He deployed a 2nd squad behind the house and started to inc them around to get in a position to fire at my units in the open. They only reason I was holding on was that I was firing three units at his one despite me being in the open and the Americans being in hard cover. By now my Rifle Grenadiers had been killed so my FM was down to 7 while P-Y's was down to 9 from 11. His SL in the house got wounded.  I felt the only way to combat this was to increase my firing pressure so I added my LMG squad plus my 2nd Sturm squad to the mix. This worked as I now had 5 units firing and I was starting to cause significant damage, P-Y moved his 2nd squad around the house and fired back at my guys in the open hitting on 4's as my troops are green and the Germans firing back hitting on 5's. I got lucky and 2 more of his his leaders were hit and his FM was down to 5. By now I had moved my Panther next to the house where he had a JOP shutting it down. He had to use a CoC dice to interrupt and move one JOP or I could have shut down both JOP's.
Things were now looking good, the Americans were forced into a position were they really had just one useful JOP preventing them from firing from the southeast at my flank. I was able to manoeuvre the Panther into a position where it could fire at the American platoon in the open. I was able to fire all 5 units over the next couple of phases at the troops in the open, they broke, the American FM went down to 4 and the American platoon made a break move hauling a wounded SL and JL with them. But I had a CoC dice and ended the turn. Two routed leaders and a team are a lot of FM tests, the American retreated. One table to go! You will note that "The Butcher" stayed back and never deployed so he has not been shot in the back yet.
The Germans lost their 3 Rifle Grenadiers, 1 IG artilleryman, as well as 6 infantrymen. The Americans lost their sniper, their Bazooka team as well as 12 infantrymen. 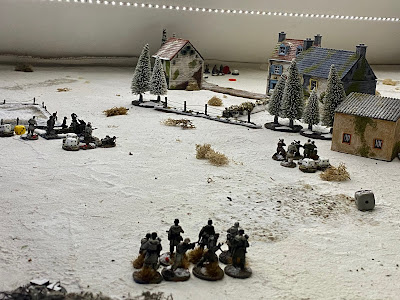 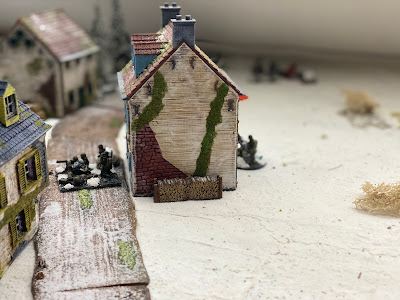 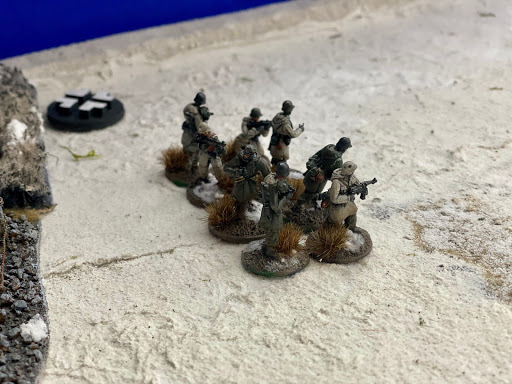 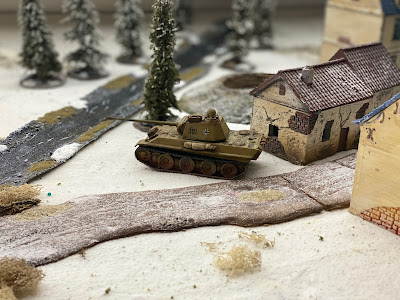 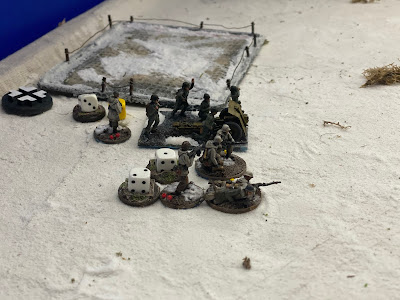 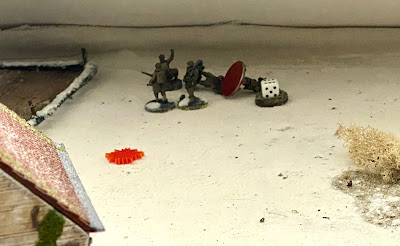 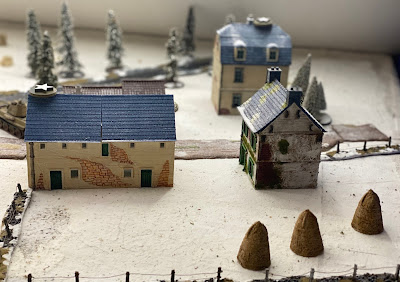 In respect to the campaign I am at turn 7 still, and just realised from FB that there are no limits on the number of tables you can Blitzkrieg in one turn with one platoon. I did take some loses here, but really if I can take the last battlefield in this turn, the Germans will have a major victory in the campaign. Time to Blitzkrieg yet again. This is going to be a challenge as although the Americans lost many men on Battleground 6 in the original assault, they have been able to retreat enough men from Batllefields 5 and 3 to make a full platoon.
Posted by john de terre neuve at 15:27