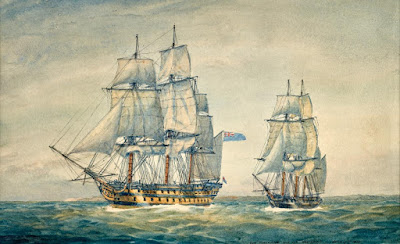 I had a nice game of Black Seas with Adam a couple of days ago, I had not played for a while. Adam set up the game. I played the Brits and he played the French.
It was a simple scenario, we had 3 ships each and the British goal was to move 2 ships from the southwest corner of the terrain to the northeast corner in 6 turns. Victory could also be obtained if the British were able to take out 2 French ships in 8 turns. All other outcomes would result in a French victory. I am not 100% sure what the Order of Battle was for the French but I suspect it was similar to the British. I had 2 large 3rd rates and one small 3rd rate.
I think we played 7 turns and I have to say I had the most amazing dice, throwing criticals almost every turn. I suspect this was the cause of the British victory rather than my excellent seamanship! We played the game virtually, and it worked well. I believe Adam has hosted several virtual Black Seas games now and he has the process down. I forgot to take photos at the beginning of game but the below snaps sort of illustrate the progress, the Brits are to the left of the photo in the initial shot. 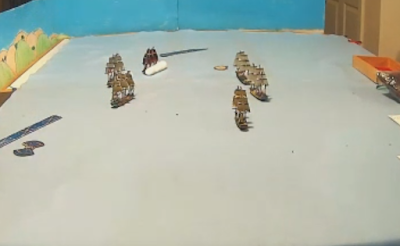 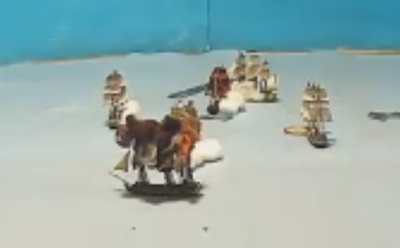 The British were able to destroy 2 French ships, thus achieved victory. I have to say I quite enjoyed the game.