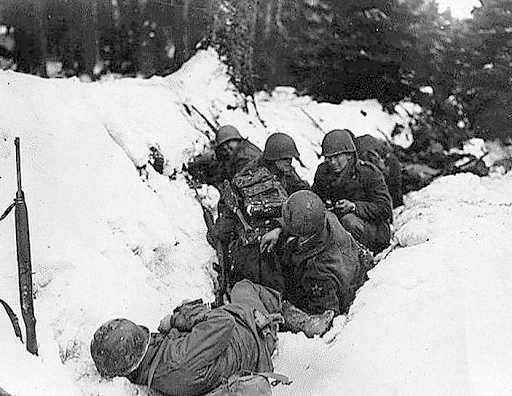 We had our fifth battle in our Bloody Bucket campaign yesterday. I have to say that in previous campaigns we were lucky to get in a game a month, but with Virtual Wargaming we are playing once a week. It certainly is a little more difficult in a technical sense, with one player having to do all the moving of troops and it is a little harder to judge LOS when you are on the far side of the game. But with linear lasers and the like it is pretty easy to illustrate firing angles even over the internet.
I hosted the game yesterday so it will look a little different as my setup is 20mm rather than 28mm and I have to say although my terraining skills are good, they just do not match Pierre-Yves's. As note in my last report, I decided to go immediately to turn 4 after my last loss as I felt I had to get more troops on the table. In this campaign you can move troops about the map before each turn. If moved they can not attack but this is what makes this campaign so much fun, from both a strategic and tactical sense. What follows are the German positions at the beginning of turn 4...... 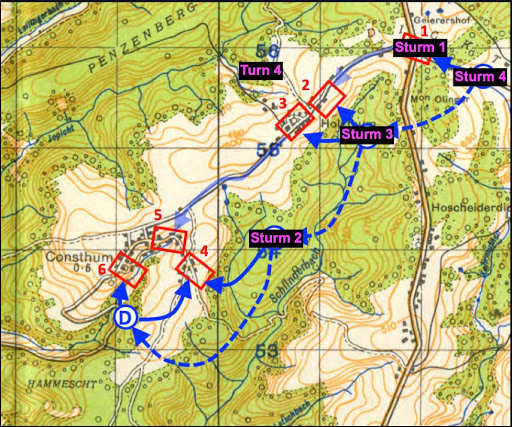 ....... as you can see I only can attack Table 4 with Sturm Platoon 2, or re-attack Table 2 with Sturm 1. I have however set myself up to be able to attack Table 2 or 3 with a fresh platoon (Sturm 3) at the beginning of turn 5. Sturm Platoon 2 is down a full squad from a previous battle so I have to be careful with my supports, one critical change for me is that the Our River has been bridged so now I have better support options.
Sturm Platoon #2
CD 5 Green FM8
1 SL
3 man rifle grenadier team
1 Sturm Squad w/JL
1 LMG Squad w/JL
Supports (12)
Captured Jeep
Sniper
LMG Squad
le IG.18 w/ JL
American Rifle Platoon
CD 5 Regular FM 8
2 SL's w/ Bazooka Team
3 Rifle Squads w/JL
Supports (?)
Barbed Wire
Entrenchments
0.5cal HMG team
Sniper
M16 "Meatchopper"
So on to the game, here are a few photos. I should say that as we are using Winter Terrain, we decide at the beginning of the game (before support selection) if the snow is hard packed or not. So a d6 roll: 1-3, Normal Terrain and solid; 4-6 Broken Terrain and soft. We rolled up for this game Normal Terrain which was a big plus for me, I initially selected a captured M8 and a Jeep, I failed to capture the M8 but did get a Jeep. Where the terrain was solid this made it quite a bit easier for me as we were playing The Probe scenario. 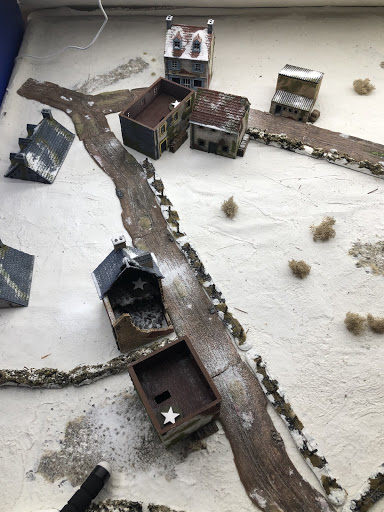 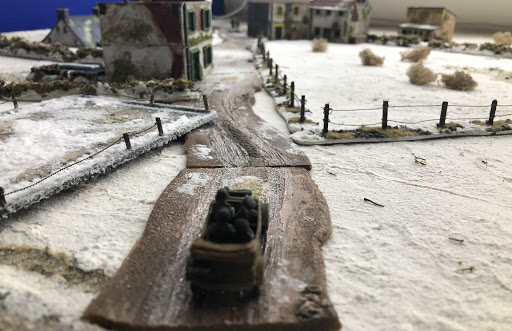 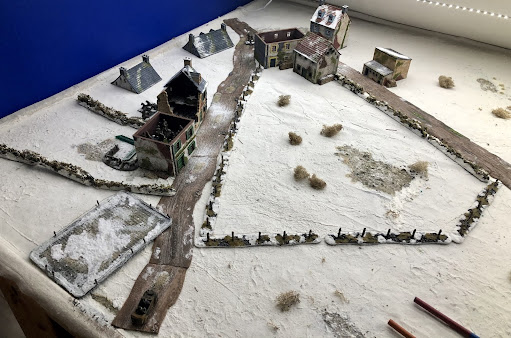 As you can see from the first photo I set up my JOP's in the forest and one just left of the road on the southern edge. All the American JOP's were in hard cover in the 3 houses. I was suspicious that P-Y would set up all his troops in hard cover so of course an important option for me was to select an IG. This time I got to go first, I had a lot of double phases at the beginning of the game, so I was able to set up all most all my troops in the forest on overwatch, I held back one LMG team and the Captured Jeep. This, I believe, made the American extremely cautious in deploying al though they started to get numerous double phases as well. P-Y placed a mortar team behind the house but was slow to place another unit to gain some indirect LOS. Finally he placed on of the most vicious weapons available to the Americans, a 0.50 cal HMG in an entrenchment, he took aim at my IG as well as my Rifle grenade team and a LMG team. Today the dice were with me, I took some shock but as I had everyone on overwatch and within 2 phases I was able to rout this team off the board. At this point P-Y had very little on the table, and I got a double phase, here was my chance. I placed down the captured jeep with a LMG team in it, as the ground was solid I was able to roll 3d6 doubled for wheeled vehicles. I got 30" of movement and made it to the road on the American edge. I rolled my 2nd phase.....no 1. I was really stupid as I should of placed a JL with the Jeep thus allowing me to move on 1,2 or 3. I was stuck in the open and it was the American phase. P-Y spent a lot of time thinking about his options, and finally placed a American squad in the house and behind the house in anticipation of me disembarking from the Jeep and making a run for it. He then deployed a PanzerSchrek team on the road and loaded up some HE (soft skin vehicle rules) and aimed. But I had a CoC dice ready to go, it was a hard decision on whether to fire or move as I had the option with my Interruption. I needed 24" of movement to get off the table on 3d6 or 9d6 of firing dice to hit on 5 and 6's. I decided to make a run for it (if I had remembered the captured vehicle rule that the Americans had only a 50% chance of being able to recognise that the jeep was in the hands of the enemy, I would have fired) but the gods were with me and I rolled a 12 on 3d6, I was off the table....finally a victory after 2 loses!
At this point, I am not able to attack with any other squads, so my only option in this turn is to Blitzkrieg Table 5.
Posted by john de terre neuve at 08:50