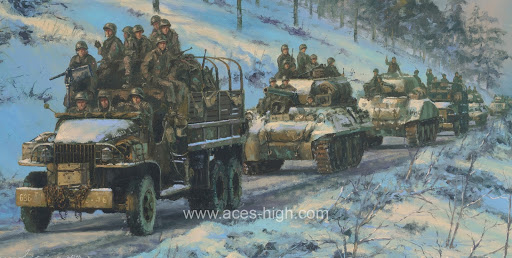 Myself and Pierre-Yves restarted our Bloody Bucket campaign last night, this was our first game since January as the Covid put any trips to Montreal on hold. Of all the campaigns put out by TFL for CoC this is the most fascinating to me because of it's complex set-up and myriad of choices. I have been really looking forward to restarting it.
I am playing the Germans, and they have a difficult task in this campaign as they are Green troops who are  outgunned. This is our second turn, each turn can have more than one game. In the first phase of turn 2, I attacked Table 2 with a Volksgrenadier Sturm Platoon from Assembly Point B, I got crushed as you can see in my previous report. Rather than going to turn 3, I decided to attack Table 1 with another Sturm Platoon from assembly point A. The following may help explain things. 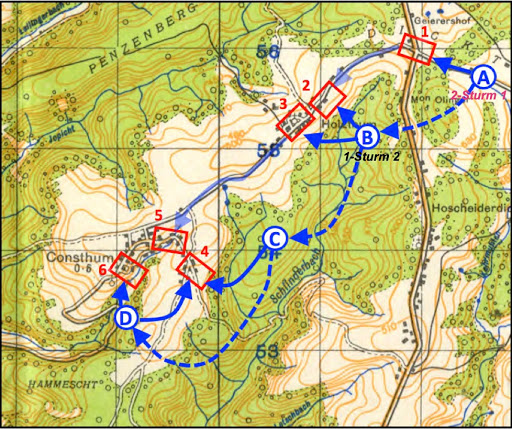 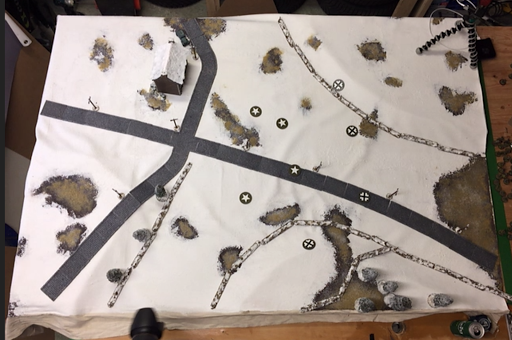 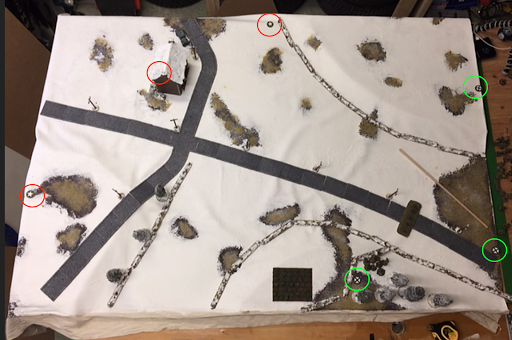 So on to our game, so I should say first that we made some enormous screw-ups with my platoon, it should have been 2 STG-44 armed squads and one LMG Squad. Somehow another this morphed into 3 LMG squads and to make it worse an extra LMG squad got on the table somehow. So the Americans were at a bit of a disadvantage! I am not sure though how much this affected the game as I got a triple phase and a double phase in my first 3 command throws and had knocked down the American FM to 5, almost immediately before I got too many squads on the table. 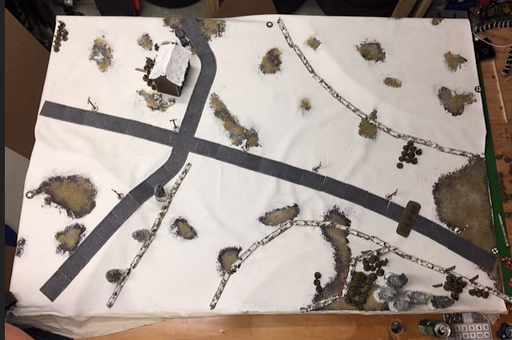 I placed all my resources in the forest as this is the only cover I had, P-Y placed a squad in the house. With the initial double and triple phase I was able to take this out and with the sniper I was able to take down a SL (we use the TT modifications for the ruleset, in respect to double phases, snipers and OT Mortars). I am not sure how I ended up getting 4 squads on the table and this one was placed out of cover as you can see. By now P-Y's FM was 5, so it was really a case of focussing on dropping his morale while keeping mine and driving him off the table. He placed 2 squads in the top and bottom floor of the house that provided hard cover. I sent off a diversionary attack along the south to try to capture a JOP, P-Y set up his HMG aiming south behind the house. At this point the obvious win for me seemed not so obvious, as he destroyed my squad in the open approaching the house. But I was able to keep the attack up on the house and drop the American FM to 1 while mine was still 5. P-Y withdrew, Table 1 captured. I felt bad that I somehow or another screwed up my squads as they were more powerful then they should have been, but I will be blitzkrieging Table 2 with only 2 squads while the Americans will have a full complement in place.
So a German victory, somewhat ill gained, to even the score. Rather than doing the post game campaign summing up, I decided to Blitzkrieg Table 2 from Table 1 down the road. This game will be played next Monday. I will be going up against a full American platoon, with my Sturm Platoon less one VG Sturm squad. I am sure we will get it right this time.
Pierre-Yves takes a lot of great photos and you can see his beautiful terrain and figures on his Facebook page.
Posted by john de terre neuve at 09:24