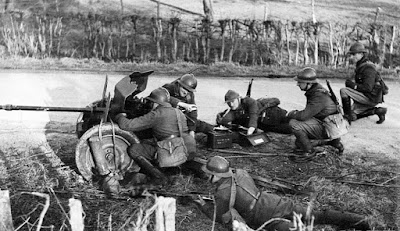 Last night, we played the first game in our CoC Gembloux Gap campaign. In this campaign I am playing the Germans, I thought it only reasonable that Pierre-Yves play the French. As an interesting aside, P-Y tells me his grandfather fought in actions close to this specific battle. I prefer Early War as there are less powerful AFV's which can really take over the game like the Panther in our Bloody Bucket campaign. I do not have a French force but the Belgians are similarly organized so I susbstituted them for the French.
Rather than typing out their force structure and available supports, I have taken a photo of my 20mm forces. The Germans are primarily AB while the French (Belgians) are from Early War Miniatures. Most of the vehicles are 3D Prints aside from what appear to be some EWM and PSC's. I recently got a resin printer some the FDM prints which are pretty rough will be replaced. 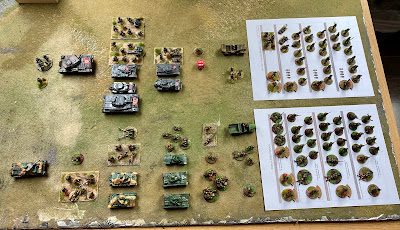 Missing from the supports are additional infantry squads for each force as well as the MC Recon Squad for the Germans.
So on to our battle, I have copied the terrain map from the Scenario booklet. P-Y has wriiten an ap to apply more accurate measurements to the terrain in order to assist in laying out the terrain. 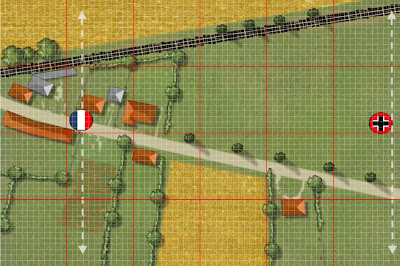 Here are some photos of the terrain, I set up before the game. 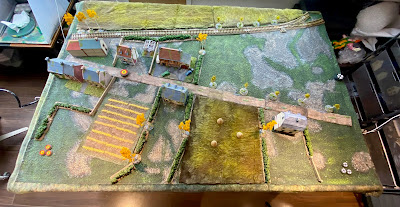 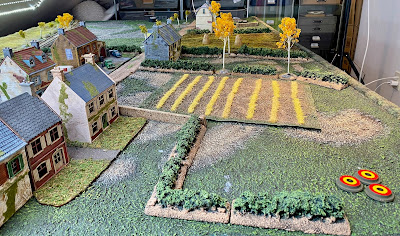 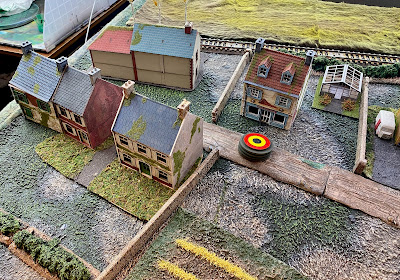 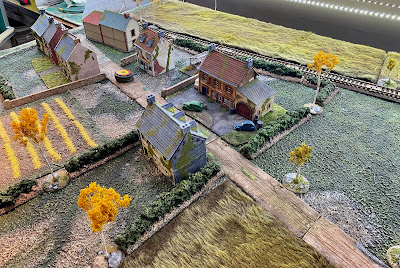 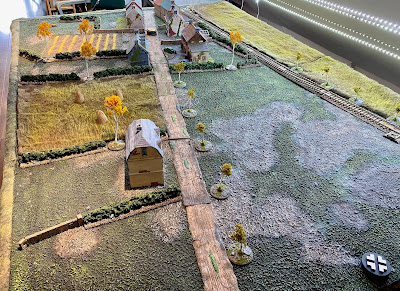 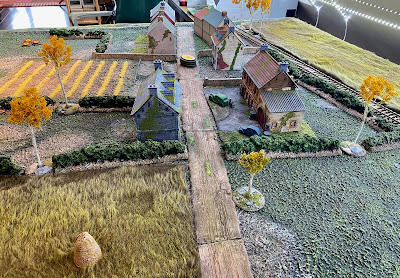 So at 1845h, I fired up Zoom to get the game started. I had posted some photos of the terrain on "The Drive to Minsk" discord channel, a couple of my Finnish gaming friends asked that I post the Zoom link to the game on discord, I had no expectation that they would show up as the game was starting at 0200h Helsinki time but before I knew both Janne and Eero were on line. It must have something to do with their long winter nights, as I could not stay up that late! P-Y soon joined us, and we played the Patrol Phase on another of his aps, unfortunately I forgot to take a screen shot of the action. But you will be able to see the JOP's in the following photos.
Dice were rolled and the game started:
Germans (FM 8) (3 Shützen Regiment)
Schützen Platoon
Supports (10)
IG 18
Jean-Claude
?
French (FM 8) (110e Régiment d'Infanterie)
Infanterie Platoon
Supports (7)
2 entrenchments
60 mm Brandt Mortar Team
Escouade de Fusiliers Motocycliste
The Action
P-Y won the toss to start and on his first throw declined to place any troops, as is usual with a defender. I threw my dice, and for the first time in what I felt was a long time, the dice gods favoured me. In the ensueing phases I believe I got 4 double phases (we use the TT modifications for CoC, so no firing with the same unit consecutively). I immediately placed a squad north of the railroad tracks on overwatch, followed by Jean Claude in the tall house on my side of the terrain with my IG 18 on overwatch south of the aformentioned house. P-Y responded by placing his 5 man Escoude de Fusiliers in an entrenchment behind the garage. He followed with placing his Brandt Mortar Team out of LOS behind the house on the otherside of the road south of the garage. We exchanged fire over several phases, I added my 5cm Mortar Team just north of the IG team, adding one of my SL out LOS behind the house. I lost 3 of the men in my squad on the railroad tracks but was able to take out the Escoude de Fusiliers as well as their JL. By then I had added another squad next to the house where the majority of my troops were deployed and started to advance them across the southern wheat field. P-Y made one last heroic attempt to drop my FM by deploying a Groupe de Combat in the entrenchments vacated by the motocyclistes but no avail. My troops held, P-Y's FM was 4, while mine was still 8, he withdrew. I am hoping the following photos illustrate the placement of the troops and the action as previously described. This was a very quick game, maybe one of the shortest I have played taking about an hour. No great tactics on my behalf, but my dice were great and P-Y's were less good, so a German Victory.....on to table 2. 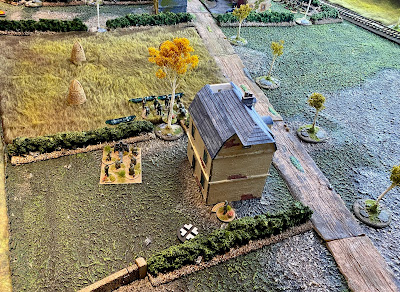