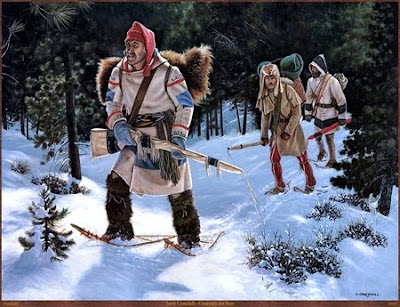 I had another go at the rules over the last 2 days and was able to finish a 250 pt per side scenario in less then a couple of hours.

Setting
Wawanaloath with his braves as well as the coureurs des bois have been tasked to explore an area of deep forest, there is very little visibility, they want to avoid contact with any enemy units. Unbeknownst to them, a force of Rangers with some British regulars have been asked to indetify and  then sabotage the enemy lines of supply.

The table was set up using the scenario set up rules in the Redcoats and Tomahawks source book (Exploration/Sabotage). The attacker was rolled for and the deployment points were placed. Essentially 2 per side on opposite edges of the table. I put these down blindly. The Brits had to take the 2 Abenaki deployment points while attacking Abenaki have to withdraw at least half their figures from the table at their exit points. These are placed once all units from both sides are on the table. 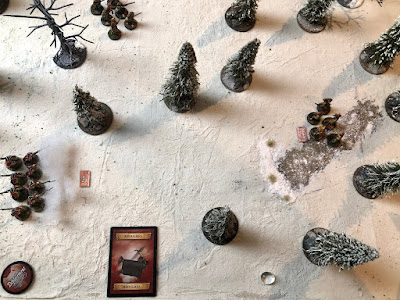 I should mention when playing solo, I deal 3 cards to each side face down, I am blinded to these cards and just draw a card from the top starting with the attacker. If I happen up on a clock card it is placed to the side and I draw the next card from the that deck. Once one 3 card deck is exhausted, I add 3 cards to it. Otherwise all rules stand.


Well another fun game, but I think it would be better to play with some larger forces. I have loaded the shopping cart at Warlord Games; lot of nice figures out there but I think if what I want is available from Conquest Miniatures, I will continue to go with them......I just have to push the buy button.

I am enjoying the solo wargaming but I do look forward to actually playing a game with an opponent.


Here is an excellent introduction to the ruleset.