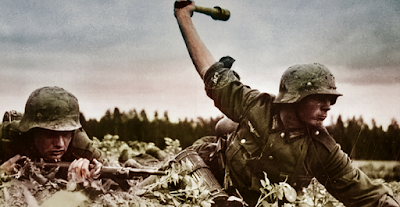 Over the last couple of months, I have been painting new German and British platoons for Chain of Command. I had been using Plastic Soldier Company 1/72 figures and they have done great service, fighting many battles. They were getting damaged and there were a few things I wanted to change as I was having problems with transport as well as wanting no multi-based figures. When transitioning from a 28mm Napoleonic to new 18mmAB army, I decided to go with metal bases that could be placed in magnetic drawers and easily transported. The troops have travelled back and forth to Montreal several times now without any damage so I decided to transition my WWII figures to a similar system.

As AB Figures has an excellent selection of German and British figures in 20mm, I decided to go primarily with them. I find WWII much more interesting to paint than Napoleonics (and of course easier) so I decided to take on the project myself. I have finally got around to finishing the painting and basing so time to take some photos.


And finally on to the actual transport system:
So a few additions still needed, I am working on a Bison now but I believe I have most of the necessary AFV's for both EW and LW. I plan to paint a 4th squad as a support but all in time!
Posted by john de terre neuve at 12:57