There are Many Rivers to Cross-Turn 2 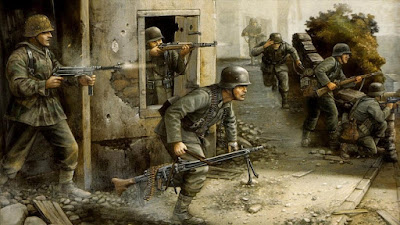 Yesterday, myself and Greg got together at my place to play the next turn in our Belgian Invasion campaign from the TFL 2018 Annual. It had been 3 months since we played the last turn so it was time to get moving!

The next scenario was table 3 which is based on the Swift to Support scenario from the 1940 source book. 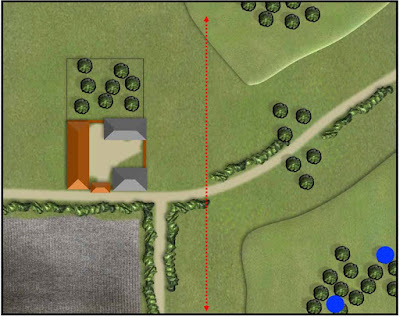 We both decided not to rotate out our platoons so went with the surviving elements from our first game. We went through the pregame process and came up with the below starting forces.

The ending force morale was 8 for the Germans and 6 for the Belgians. The Germans lost a JL and 5 riflemen while the Belgians lost 19 riflemen. So once we apply the post campaign process and the losses from turn 1 we have the following:

Campaign Tracker
Germans
Commander's Opinion+2
Men's Opinion +1
Platoon Leaders's Outlook: Droll
Belgians
Commander's Opinion-1
Men's Opinion -6 (-2FM, Sl 6" command range)
Platoon Leaders's Outlook: Sad
This was an interesting game. I definitely was very lucky in respect to command rolls with 7 double phases while Greg I believe only had 2. In dice rolling, we were about equal, earlier in the game Greg certainly had lady luck on his side but as the game went on I caught up. As I noted in my initial post, it was going to be a challenge for me as I am naturally a defender. Greg was a real gentleman yesterday in pointing out the maneuver that won me the game. I certainly have learned a lot about tactics from playing with Greg. It is interesting to me that it is really quite valuable to play with multiple different players as there are so many approaches to playing CoC.

Labels: Action Reports, Campaigns, Chain of Command, Too Many Rivers