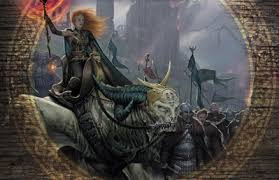 Myself and Adam got in our first game of the new SAGA universe Age of Magic last Thursday, and although we made a few errors the game was a lot of fun. This is a superbly constructed new source book which has clearly taken a lot of time to put together. There are 6 new warbands all from the Fantasy World with multiple new abilities including the use of Magic!

I suppose what was really cool for me was that I finally got to field some of a large collection of LoTR figures that have never seen the table or were last used by my son Simon 15 years ago when there were still Games Workshop Stores in this area. The figures he painted years ago are of special significance as they got me into painting miniatures and subsequently into wargaming which has become a very important hobby for me.

I had some time to put together a warband and after some thought decided to go with the Masters of the Under Earth army. Adam decided  to go with a Great Kingdoms warband. We decided not to use magic in this game as there were a lot of new rules to learn and this proved to be a good decision as we never finished the game despite being at it for 4+ hours. We usually finish in 2 hours, but there are a lot of moving pieces and we were using the recommended 8 point warbands.

Masters of the Under Earth (8 SAGA Dice)

Adam has already written up an Action Report as you can see on his blog, but I thought I would post a few photos.

We totalled up the points and it appeared that the score was 30 to 29 points favouring me, however we made quite a few mistakes and I believe that most of them benefited the Masters of the Under Earth so I think that the victory in this truncated game should go to Adam.

I have to say that I really enjoyed this iteration of SAGA. We both learned a lot and I suspect our next game will go much smoother.
Posted by john de terre neuve at 08:10