There are Many Rivers to Cross-Turn 3 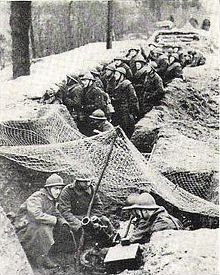 So on with some photos.

The ending force morale was 11 for the Germans and 8 for the Belgians. The Germans lost 1 support MMG gun crew and 1 rifleman while the Belgians lost 7 support riflemen. So once we apply the post campaign process and the losses from turn 2 we have the following:

It was an interesting game as the scenario is a challenge. I was surprised that Greg did not take a new platoon but when I thought about this, I realised it was a good decision as victory was not dependent on firepower but more on maneuver.

I think the diceing was about equal and we both got the appropriate number of double phases, but I was lucky to get the triple 6 when I did has it lifted all Greg's smoke at a critical time in the game. Without the smoke he was wide open and was forced to withdraw.

The next game is going to be a challenge for the Germans as their advance has been a little too quick and although the Belgians failed to blow the roads, the Germans mobile support still has not caught up to them (this does not happen until after turn 4). The next table is based on the Blitzkreig scenario from the 1940 sourcebook, it is going to be hard to exit troops off the other end of the table without any wheels!