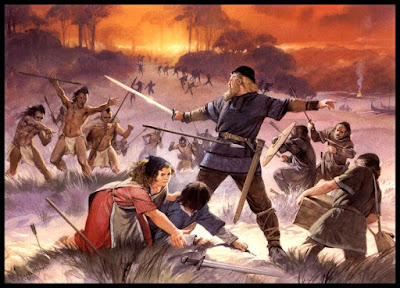 Myself and Adam got together at the Hobby Bunker last night to have our first game of SAGA in more than a month. Holidays are nice but I miss my gaming. I stuck with my Skraelings and Adam decided to go with Vikings, a faction he has not played for some time.

So a massive Skraeling Victory of 34 to 14 massacre points. It is not often that I get such a significant victory playing Adam, he is a very wily opponent. I believe the dice probably favoured me and the Viking BB is new to Adam. I also believe that I am getting the measure of the Skraeling BB and am finally figuring out how to use javelin armed troops.

I have a really busy 2 weeks of gaming coming up with me being off to Montreal on Monday. I have a CoC game planned for Tuesday, a GdA planned for Wednesday; Saturday back to MA for a CoC game to continue the Too Many Rivers campaign, Monday week hopefully the restart of the CoC Von Luck campaign and then the next Friday off to Portland for Huzzah.