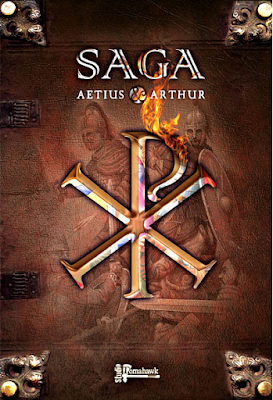 Last night myself at Adam got together for a game of SAGA at the Hobby Bunker. There is no question that we both enjoy this ruleset and Adam got to field his newly painted Irish Warband. He really did a great job on them. The game was also a bit of an occasion as this will be our last game of SAGA, as our next game will be played using SAGA2. I am looking forward to this as I believe it the re-write will be a significant streamlining of the rules.

I had planned to field a Moslem Warband but for a couple of reasons I decided against it. I am one unit short to make 6 points so it was going to be a little difficult and SAGA2 is going to result in a significant rewrite of the battleboards.

Thus I decided to go with a warband from the Aetius and Arthur supplement which is SAGA2 compliant. I have played both the Romans and the Britons from this book and wanted to do something different. After a quick look through I decided to go with the Saxons. I am by nature a defensive player and the Saxons are an aggressive warband so I felt it would be a good warband to try to get out of my comfort zone.

We picked the Retreat scenario from the A&A supplement which we had played once before. The last time Adam was the attacker and won the game, so it was felt only reasonable that I should attack.

Adam went with a Standard Warlord as well as 2 Curraigh derived from a 2 units of Hearthguard. He also went with 4 Warrior units, one being some Irish Wolfhounds for his 6 points.

I went with the Hengist and Horsa 1 point warlord upgrade as well as 4 units of warriors and 1 unit of levy for my 6 points.
The Irish had all escaped by turn 5, but despite an abysmal Turn 4 SAGA dice throw where I got 6 Common Dice, I was able to eke out a victory with a 21 to 17 point victory for the Saxons.

It is not often I win against Adam, so I have to say I was happy with my choice of Warband. The Saxons have an interesting BattleBoard, so I think you will see them again.