Attack on an Outpost: Pacific 1942 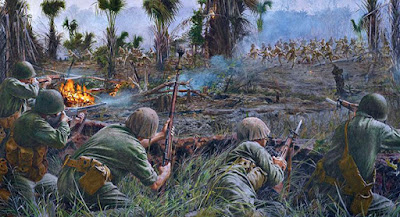 This has been a bit of a weird week for gaming, I had games hopefully lined up for today and this Saturday but they both fell through. My son happened to be home and when asked agreed to give my new 1941 Pacific troops ago. I still have 3 squads of USMC to paint as well as 2 squads of Japanese and some supports to do, but the leadership and 2 squads of each as well as some limited support were available so we said why not.

Still a lot of work to do on terrain as you can see below the board is pretty sparse for jungle but we did have enough to set down to block LOS and give cover. We decided to play scenario 6 with the USMC attacking a Japanese jungle outpost.
We got in maybe 12-14 phases in 1 turn with 3-4 double 6's on each side and 2 CoC Dice each, so there was lots of play. I was a little luckier with my dice and was able to beat Simon's FM down to 4 so he withdrew, it took about 60 minutes so a nice little game. Time to work on more terrain.