I have been promising for some time to show off this new Napoleonic army, so here we go. I decided to go with exclusively AB Miniatures which are thought to be the best in this scale. They are very nice, minimal flash generally (although of course I painted very few of them) and there really is an enormous selection. My only criticism is that the metal is a little soft; we have lost some bayonets and because of this the flagpoles are a bit of a joke, so much so that I have had both painting services remove them. I have replaced them all myself with stiff metal lances (I bought a bunch a long time ago so I have forgotten from where they came). This has added a bit of work for me but I had to add standards anyway. Most of the standards are from GMB with a few from Adolfo Ramos. I would have liked to have used Flagdude but we all know that story!

After a lot of thought, I have decided to go with a Peninsular War OB, generally mirroring the Battle of Salamanca in July of 1812. I am sure I will drift into the Hundred Days campaign, but for now limiting myself to the Peninsula was thought prudent (after all this project had to be self funding from the sale of my 28mm figures). I will not go into the unit by unit detail of the OB but suffice to say it is as follows:

ANGLO-PORTUGUESE
FRENCH
SPANISH Portago's Division (Spanish Army of Estremdura 1808)
They are not all photographed as the Spanish are on their way from Spain and I am missing still 9 battalions of French, some artillery as well as a battalion of caçadores (3 French on the way), but the rest are below.

The units have been based for the General Bonaparte meets Chain of Command (a playtest title) ruleset. As I have said ad nauseum, this is the best Napoleonic ruleset I have played. The formed infantry units vary from 6-10 stands, but stands are also required for two different types of skirmishers (as discussed below). Command figure stands are also required for colonels, Brigadiers, and Divisional Generals as well as ADC's. The game is aimed at the Divisional level with 2-4 brigades per side with cavalry and artillery support.

I commissioned 2 painters, Jose M D Aznarez (aka Pep) in Spain and Big Battalions (Graham John Campbell) in Thailand. I found Pep on TMP, he regularly sells painted AB units, so I bought a unit, found the painting to be excellent so went ahead a ordered the French units as well as half my British units from him. A little later I came up on Big Battalions on eBay, I established communication with Graham in a somewhat round about way and he sold me 8 units of painted French cavalry. These were also quite excellent so I put in an order for the 10 remaining British battalions I had not yet commissioned.

I really can not say enough positive about both these men, Pep is an excellent painter and Graham runs a first class painting service. I acquired this massive army (I am afraid to count the number of units) in less then 6 months. They both have excellent communication skills and I never worried once about the accuracy of their uniform details. Amazingly enough, neither took money up front, they purchased the figures themselves and only charged me when the figures were painted and ready to be shipped. I can recommend both services without hesitation. Pep and I purchased our figures from Eureka Miniatures USA, I have to say that Rob Walter runs an excellent operation, I have never had to wait for more then 2 days for an order. I am sure the Australian Eureka operation is the same.

Well on to the figures. 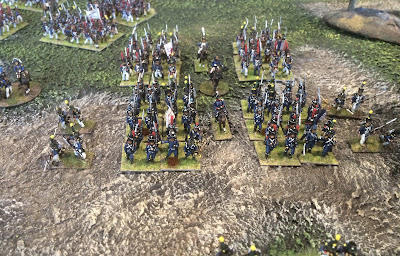 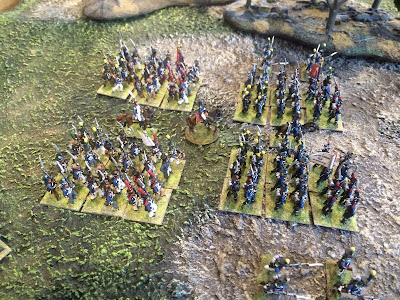 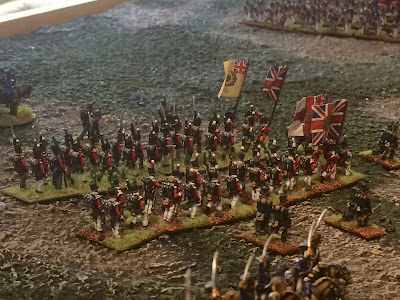 I can say that I have absolutely no regrets selling my 28mm Napoleonics. I finally have a coherent Peninsular force which will soon be complete. They are all on metal bases and the amount of storage required is minimal. As you can see from the first photo it is possible to field the 3 British divisions and 2 French divisions with cavalry and cannon on a 6x4 terrain. They are beautifully painted....what more could I want!
Posted by john de terre neuve at 12:33