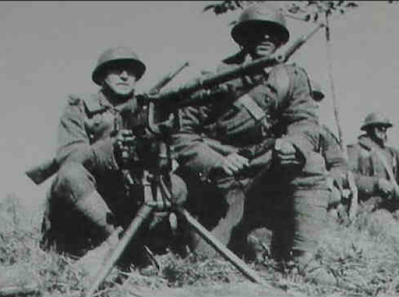 I have to admit I really do not have a clear idea on how to take this table. The initial plan for my first go went OK in respect that I denied one of the houses to the French for a firing position in hard cover, but now they will get a free entrenchment to convert 1 team to hard cover and will probably add one for a single support point. They are already set up for hard cover in the north because of the stone wall. I am finding without armour the approach through the cornfield is quite treacherous. It is covered by the canon de 75 m1897 which is lobbing covering reducing 6 HE at a time. My hope was that I could move through the forest and get at the edge with 2 units on overwatch before the French could get behind the stone wall and overwhelm them.......best laid plans!

Dice were rolled and the game started:
Germans (FM 10) (3 Schützen Regiment)
Schützen Platoon #2 (less 5 men)
Supports (13)
Red Dice
Pre-game Barrage
IG18
Off-Table MMG
Jean-Claude
MO
French (FM 9) (110e Régiment d'Infanterie)
Infanterie Platoon #2 (less 11 men)
Canon de 75 m1897
Supports (7)
MMG
Entrenchment
As usual we played out the Patrol Phase on P-Y's ap. The smaller dots are the JOP's, while the numbered dots are the PM's at their final positions. The game was based on the Attack and Defend scenario from the CoC rulebook. I had 4 free moves but really did not advance my PM's through the northern forest to gain much advantage. 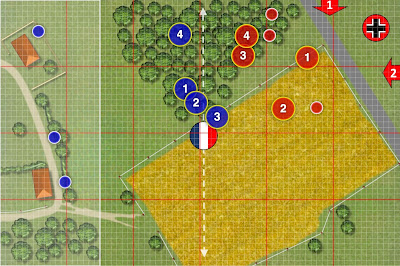 The Action
Unlike our previous games, P-Y's dice were quite good, he started off with a double phase and despite me having a pre-game barrage he got all his units on the table within the first few phases....all on overwatch .....before I had got any troops in position aside from the OT MMG.
I had taken an Off-Table MMG which was able to kill one of his rifle teams but solely because they were in light cover, everything else was in hard cover. 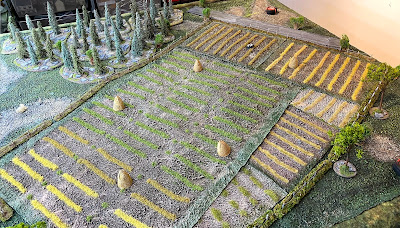 Anyway a placed a squad in the cornfield on tactical, got Jean-Claude in position. The sniper was good at scoring hits on the French leaders but every saving throw was a 1 or a 2, thus no effect. The IG18 went in the forest but really could not advance safely and the squad in the field started to get chopped up and made a run for the forest line but got pinned before they could make it and before I knew they had broke, a series of poor FM rolls brought my FM down to 3, time to withdraw. I ended up having my platoon reduced by a full squad, dropping my CO and MO, and advancing the campaign clock by one with the only gain being a single French gun team crewmen killed. A very unsuccessful game.
Butcher's Bill
Germans (platoon 2)
Final FM 3
7 men killed
(7 killed, 3 missing next game)
CO 0
MO -2
Cautious (-1 FM)
French (platoon 2)
Final FM 8
1 man killed
(10 dead next game)
CO +4 (+1 support)
MO -1
Sociable (+1 FM)
Posted by john de terre neuve at 08:20