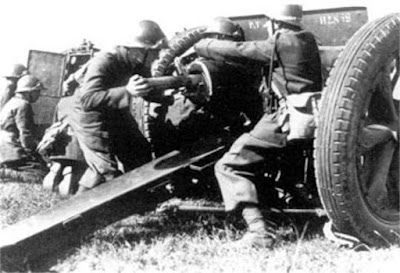 We had the next game in our Gembloux Gap campaign on Monday morning this week. The Germans have moved on to Table 4, this is a tough one. Speed is of essence, but no armour! The French have a free heavy artillery piece.

Here are some photos of the table. 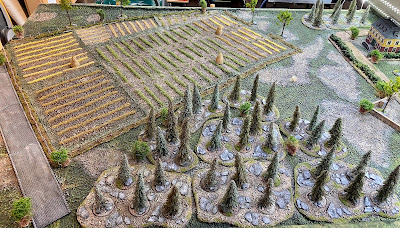 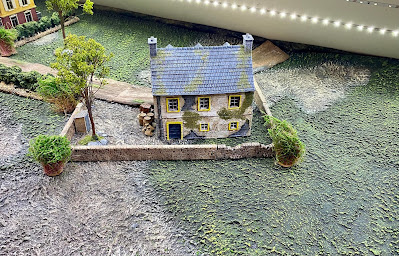 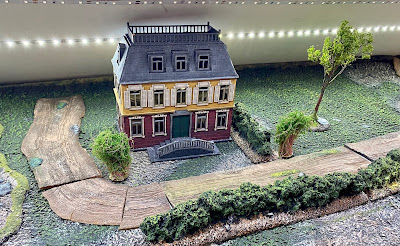 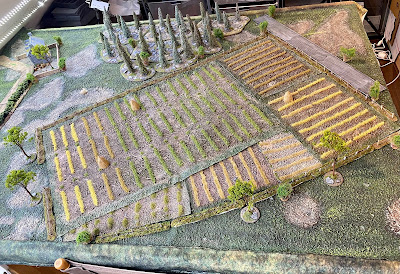 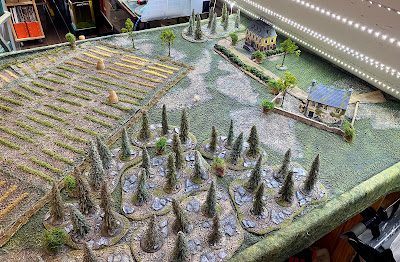 I had a simple plan in this game, to destroy one of the houses and try to run up the table to deny one of the JOP's to the French. I expected to lose this game but I wanted to be in a good position in the next try on the table which uses the Attack and Defend scenario from the CoC rulebook.
Dice were rolled and the game started:
Germans (FM 10) (3 Schützen Regiment)
Schützen Platoon #2
Supports (12)
Red Dice
Extra Schützen Squad
Stuka
Jean-Claude
French (FM 9) (110e Régiment d'Infanterie)
Infanterie Platoon #2 (less 12 men)
Canon de 75 m1897
Supports (8)
Sniper
MMG
Entrenchments x 2 (this was in error)
As usual we played out the Patrol Phase on P-Y's ap. The smaller dots are the JOP's, while the numbered dots are the PM's at their final positions. The game was based on the Swift to Support scenario from the 1940 book. I started at the #2 arrow and had no free moves, I did as well as I could have with a JOP at the edge of the forest and one in the cornfield. 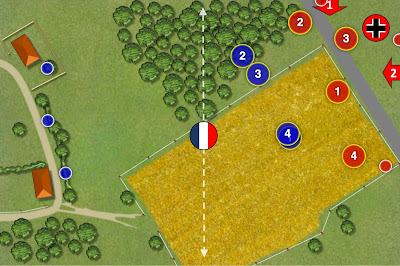 The Action
The game went as expected, maybe a little better initially. I was able to get 2 squads on the edge of the forest unscathed with 2 squads in the cornfield as well as JC and the 50mm mortar team. The Stuka attack took out the most important defensive building the large villa in the south. It caught afire. The wind blew to the west, thus the smoke had no affect on the game. The French had been able to build their defensive line to the north but still had not got a lot of units in the south. I threw my dice, I had a SL with each grouping of units, it was well set up that I was going to get 2 squads to fire at close range on the French in the north with a back up of the 2 squads in the south. Almost any combination of dice should of helped. I threw the dice and all I could fire was the one squad in the forest...amazing! I threw the dice I got 10 hits, but the French saved them all. In the next phase, the French were able to load up their defensive line and they were able to fire. I had to use an interrupt to withdraw one squad in the forest. All my squads started to come under fire from the French VB team, 2 infantry squads the MMG team and finally the canon de 75 m1897. Time to withdraw despite having a superior Force Morale. Victory to the French. 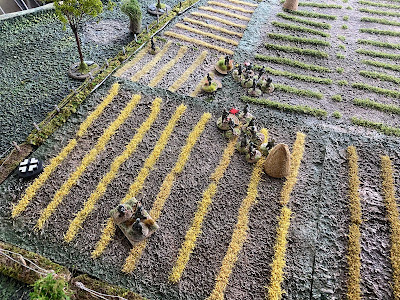 P-Y played quite a good game, he was patient and waited. It resulted in a win.