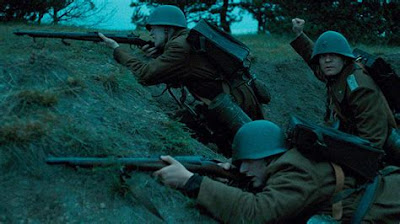 Last week, we had our 5th game in our Virtual 1940 campaign detailing the German invasion of Denmark. Both sides were now whittled down with the Danes being able to field just 2 squads. This was the 3rd German attack on Table 3. The German SL Petri was able to dice for quite high support and I was suspicious that he would finally take some armour so I felt it best to take a Madsen 20mm Autocannon.
My JOP's were a little wider spread this time and were a bit more advanced in order to deploy more closely to the Germans in a hope to get some close range fire. As it was the Germans did not take any armour and instead took an extra squad and attacked in strength on the Danish right flank. We were able to hold off our deployment until the Germans were in close range but unfortunately for the first time in the campaign our firing was quite inaccurate and we were unable to to cause any Force Morale loss. I had planned to withdraw early in this game as I felt 2 successful defences on this table was reasonable but unfortunately I was less then nimble and we took quite a few casualties before I issued the command.
So we are on the last table which is as you can see below. This is being played as an Attack on an Objective scenario with the objective being the star marked gazebo at the bottom centre. The grey houses can be occupied by troops. I suspect we will be facing 4 German squads again, some with 2 LMGs. The Danes have lost 19 men so only have 15 men left (5 leaders) to defend the village, this is going to be tough. In respect to the campaign, if we lose on turn 6, it will be a draw, one more success would be a victory for the Danes. 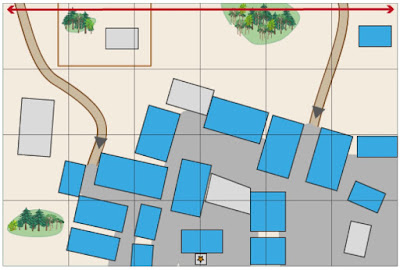 Have a look at  Eero's excellent and quite amusing Action Report, well narrated with terrific photos.
Posted by john de terre neuve at 06:40