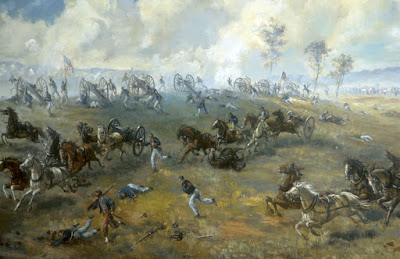 Last Friday night Adam and myself had our first trial run of our planned Pickett's Charge campaign using some of the processes outlined in the Longstreet ruleset. I believe we both quite enjoyed ourselves and aside from some very minor rules questions the game went very quickly. I think we played 6 turns in maybe 2 hours which is really excellent, demonstrating our increasing familiarity with the ruleset. I will not bother to write an Action Report as Adam has already done so on his blog.

As noted this was a test of the campaign system we had put together, I will discuss how this went but I will post a few photos first. The action in our game was centred around 2pm when the Union forces have been ordered to capture Henry Hill from the Confederates. The Confederates can place their 7 units anywhere with in 20cm of their long axis of the table, while the Union have 20cm within the bottom left corner to place their troops. We had 7 units each (6 large green infantry units and a regular Artillery unit), in 2 brigades. For this game, we double the ADC ration per brigade and gave the Confederates an extra 2 ADC's, so I had 4 and Adam had 6 ADC's. 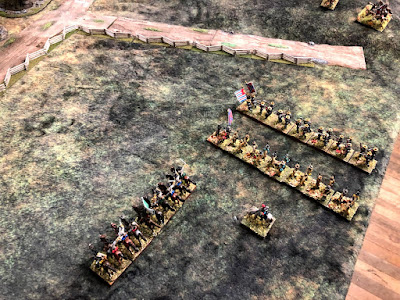 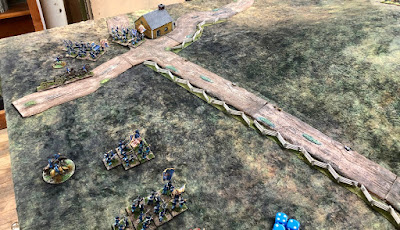 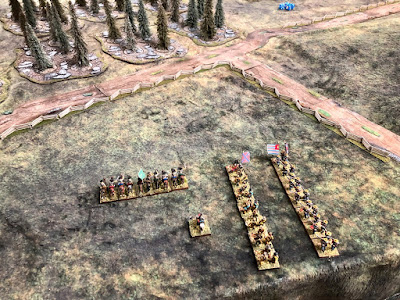 The game was a lot of fun, we played 6 turns and my attack on Henry Hill failed on the left flank, I still had a significant force in my centre but this was a test game so we were anxious to get to the post battle process.

The post game was quite easy to apply but it was clear once we had finished that some modifications will have to be made. I shall not go into detail here but I believe we both felt that their were problems addition of forces between games and the attrition process. I have this week off and am sitting in Montreal so I have few distractions aside from 2 hockey games to attend, 2 CoC games planned for the end of the week and a new gaming experience to explore which I will detail in my next post. Hopefully the campaign system will get a good going over!