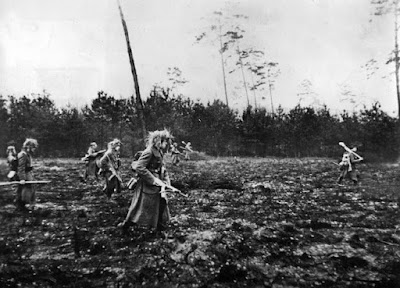 Yesterday myself and Tom finally got together after more than 10 months to carry on our Bloody Bucket campaign. I look at this as the most intricate CoC campaign available. A lot of decisions have to be made by the American player at the start of the campaign about supports and as the campaign progresses about movement of those supports. The German player has unlimited platoons but he has to move them about the combat area to support multiple attacks in the smae campaign turn. The campaign is set during the early stages of Ardennes campaign in the winter of 1944 when the Germans are attempting to take Bastogne. Although it had not snowed yet, we are playing out the campaign on my winter terrain, mostly because I like winter terrain! I should also note that in each campaign turn the Germans can make 2 attacks on 2 different battlefields and blitzkreig a 3rd if they take a table. This a challenge for game set up for sure.


After the failed attack of a Volksgrenadier platoon in turn 2a, Tom decided to  attack Table 2 with the Sturm Platoon he had moved to assembly area B. He also diced up another VG platoon at point A at the beginning of turn 2. 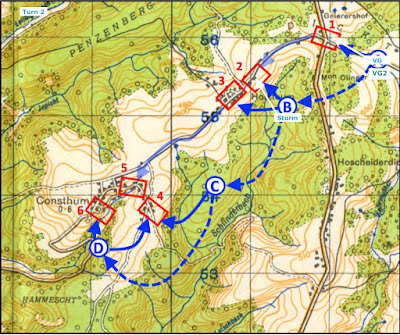 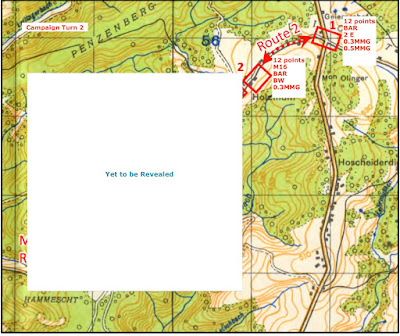 So on to the game, these are going to be extremely brief reports as the tracking of the campaign is a major project in itself.
The Summing Up Game 2B

Campaign Turn 3A (Day 1, 1100h)
So on to turn 3, the Germans first 2 attacks have failed. We applied the post game process as above (we made a couple of mistakes, as we were in a bit of a rush to get to the next game, time is always pressing). I moved some troops about and added 8 supports to tables 4,5 and 6, which will of course remain secret. I will have to get Tom to roll a dice to see if he adds a Sturm platoon or a VG platoon to assembly point A. He also has the opportunity to move one of the VG platoons at A to B. What he decided to do in Turn 3 was to make 2 attacks, starting with the Sturm platoon #1 at assembly B back into The Road to Holtzthum board and one of the VG platoons to reattack the Skyline Drive board. For ease of play he started with the Sturm Platoon attack. As this was his 2nd attack his supports increased to 15.

The Summing Up Game 3A

Wow, this is a lot of work to keep track of , but it is a great campaign. We are hoping to have our next game in about 3 weeks. I am very happy that we got this campaign re-started and I appreciate Tom driving all the way to Salem for the game. It will be, as noted, a VG attack on to The Skyline Drive.