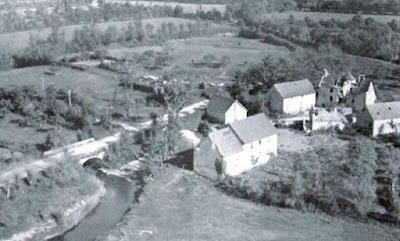 We got our 5th game in last Friday night. We again played on table 3, probably the toughest table for the German attackers. I had won the last game so I knew that Pierre Yves was determined to win. For the Germans to win they have to capture table 4 in 7 campaign turns. I decided to go with my 2nd platoon, the Germans have a fresh platoon each turn. I was +1 on supports and P-Y was +1 on the FM roll.

A well earned German victory. On to table 4, it is going to be tricky. I have to win both games, we have both used our best Wild Cards. There is minimal support for each side on table 4. We are both +1 on support rolls.  Thankfully, I will have 2 largely intact platoons. Let us hope for the best. We should be able to get both games (if indeed there are 2) in within the next 3 weeks as I am in Montreal on the 3rd week of November.
Posted by john de terre neuve at 11:45