All American-The Battle for Fière 1944 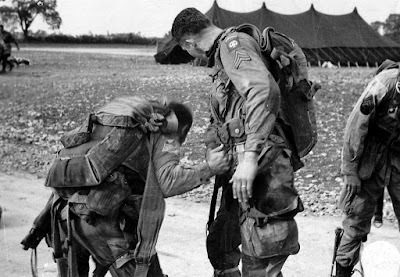 I started another concurrent campaign on Saturday in Lachine, QC. As detailed in previous posts, I had been contacted by a gamer in Montreal who was quite interested in playing Chain of Command. We have had a couple of one off games which were a lot of fun, but Pierre-Yves was quite keen to move onto a campaign which as we all know is the best part of the of the ruleset. This is my 4th ongoing campaign and they are all going well except for Bloody Bucket because myself and Tom are having quite a hard time getting together to play. Too bad as it is the most intricate campaign I have seen.

I was quite keen to visit P-Y, as from looking at his twitter stream he had quite a gaming setup. I was not let down, it was like a factory of wargaming with 3d printing, an airbrush station and just tons of terrain stuff, it was like walking into a terrain shop! Unfortunately my photos do no justice to his terrain but I should say that almost all of what you see has been self made.

Anyway onto gaming, P-Y had painted up both a German and American paratrooper force so a search about for a suitable campaign revealed a fan written campaign: All American-The Battle for Fière 1944. This campaign details the exploits of the 82nd US Airborne on D-Day, if interested find out more here on a PBS special.

Campaign Summary
The 82nd Airborne has dropped in France as a part of Operation Neptune. They encounter a combined force of German infantry and Armour. The paratroopers have secured a vital crossing necessary for the American landings at Utah Beach to succeed. The Germans counterattack.

Game 1-Probe along the Road
The German initial assault towards Cauquigny is played as scenario 2 from the main rulebook.


As usual my photos are all muddled and really do not tell the story but do illustrate what a beautiful setup P-Y has. 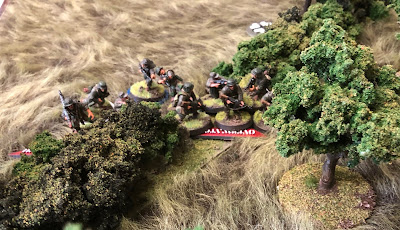 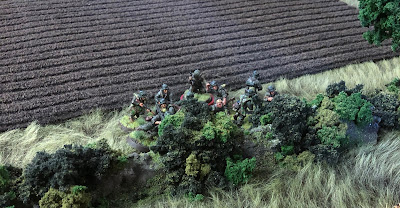 Game Summary
Very brief indeed...The Germans advanced initially down the road and in the triangular forested area in the middle of the table. I placed one force in the walled farmand another on the road on my right centre. I was able to cause some attrition on the advancing German squad in the forest. I had also placed my 3 man LMG support team to cover any German approach on their right flank. The Germans jumped into the road as well as the fields on their left flank. They also advanced a squad towards my LMG support team and engaged in an assault, the 3men of course all died. The right flank German squad now advanced  down my left flank, I had all my forces in the centre and right. Victory would go to the Germans if they could get one team to my table edge. My troops on the road covering the German advance were being chopped up the squad on the road.I took one last shot at the squad on the road but knew it was time to move them to cover my left flank. The Germans rolled a double phase, time to withdraw.

I believe the dice gods slightly favoured P-Y in this game as he got multiple double phases but otherewise things were about equal.

Hmm.....Piere-Yves has now won his first three games of CoC! A lunch was had and we proceed to game 2 of the campaign.

Game 2-Holding the Line at Cauquigny
The German assault is now in the town and almost at the bridge, the scenario  is played as scenario 4 from the main rulebook.

Game Summary
Again brief...As you can see the Germans placed all 3 squads in the  I placed one force in the walled farm complex. I placed a squad in the house on my right flank and a squad behind the hedge on my left flank. As discussed above the squad in the house got out beacuse of the Panzer,  the Germans jumped into the road, I think on a double phase and went on overwatch, then unfortunately for P-Y and I got 4 double phases in a row, the first on a triple 6. Overwatch lifted, the MMG team was placed on the road in an entrenchement and I was able to destroy

Clearly dice gods favoured myself in this game as a quadruple phase is nothing to laugh at, and this is a tough scenario to win for the attacker, I was well entrenched and was able to cause the squad in the road to rout and then ended the turn with a CoC dice. German FM was down to 4 while I was still at 10, a German withdrawal.

The ending force morale was 4 for the Germans and 10 for the Americans. The Germans lost 5 dead while the Americans lost none. So once we apply the post campaign process, we have the following:

I had a great time and P-Y is surely a dedicated gamer with a great set up. I look forward to our next game which we hope to be in the last week of August.
Posted by john de terre neuve at 09:44