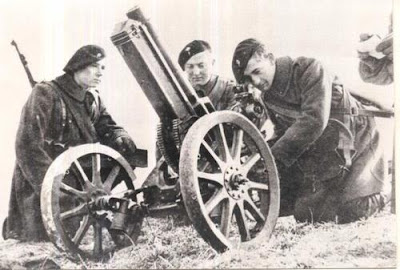 Over the last 2 weekends, I got to play the 2nd scenario from the Skirmish Campaign Hunters of the Ardennes twice against to different opponents. Last Saturday, Mike drove up from RI and Greg drove out this past Sunday from Arlington, MA. Two very different gamers and 2 very different games.

We again see a 1st Panzer Division Schützen platoon take on the Chasseurs Ardennais. It is still early morning May 10, the German Blitzkrieg has crossed the Luxembourg-Belgium border and is entering Martelange, they have to cross the Süre. The Belgians have blown 2 bridges to slow them down. On a hill covering the German approach is a Fortified Bunker with a Hotchkiss MMG manned by a small team of Chasseurs. The Schützen platoon is ordered to take the bunker, with them is a demolition squad. For a nice description of this action have a look here.

Myself and Mike got our game started around 11am. Mike played the Germans and I took the Belgians. I added a Bunker and a MMG team to the Belgian defenders as required by the scenario. The arithmetic here ended up giving the Germans 20 supports to the Belgians 10. We used The Attack on an Objective scenario from the original rulebook. Unfortunately, I have lost all the photos I took and I have forgotten some of the details.

Myself and Greg got our game started around 9am. Same scenario. I had not allowed Mike to take the Bunker Buster support in our first game but Greg asked again for this support and although it did not fit the historical scenario I allowed it as I was curious on how it might work after this somewhat interesting online discussion.


So two games in a week and 2 German victories. I still do like my Belgians though and look forward to getting them back on the table in the New Year.
Posted by john de terre neuve at 11:42