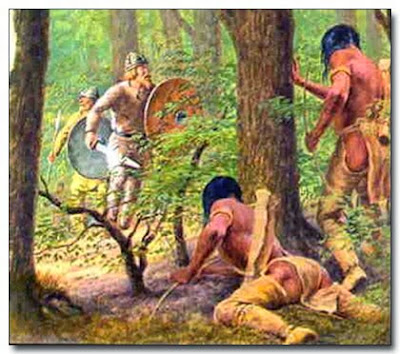 Recently I have fallen in with some local wargamers and although I still look forward to my regular trips to Montreal, it has been great to be able to play locally. In last 2 months, I have got in 3 games of Chain of Command, 3 games of Lasalle as well as 2 games of SAGA and I finally got to field my Skraelings after more then a year! This Sunday, myself and Iannick are having our first go at Muskets and Tomahawks in Montreal. So I have been busy.

After a great and very close game of Chain of Command last Saturday, I had a game of SAGA with Mike, one of the local gamers I have recently met. I brought my Skraelings and he brought some Scots. I believe Mike told me that he has played a couple of times and I may have had 5 SAGA games. I felt I was ready to play that most difficult of warbands. Things as usual did not go as planned, it might of been the several drinks I had the night before; it might have been the exciting but exhausting game of Chain of Command I had just played; but most likely it was Mike just played better then me.

Although I got crushed, I really enjoyed the game as brief as it was and I will look forward to getting in some more SAGA.

Well in a few days, I get to field a brand new wargaming unit which I have just completed for the French Indian War. They are some of the nicest figures I have painted, but I will keep them under wraps for now until they are revealed this Sunday. I am sure Iannick will have an AAR on his blog, but I will post some photos of my unit next week.