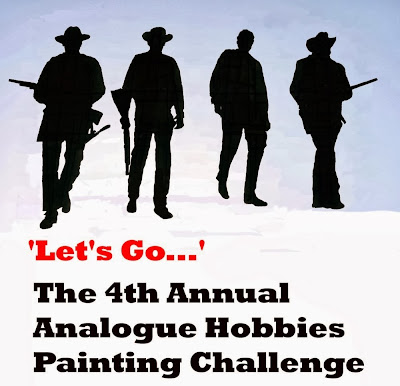 Winter of course would not be winter without the Annual Analogue Hobbies Painting Challenge. I am not really sure how Curt does it. He says he is fueled by caffeine, but I have to wonder. Last year there were 47 contestants and I believe the great majority of them made submissions. This year he has 60 contestants.........Wow!

I have submitted entries each year, the scoring system changed after the first year, but for the last two years I planned 1000 and 1700 points respectively, meeting my challenge each year. This year I put in for 1500 points, but I may increase this once I have done a detailed tally of the figures. It is interesting for me to reflect back and seeing 3 years ago I painted only Napoleonics, now I am all over the place. I think probably most of the contestants use the challenge either to clean up or start a new project. I think this year I will focus on filling in some gaps, but also hope to get 1-2 new armies started. Fortunately my shift of focus to skirmish gaming has made this relatively easy.

So without specific details here are my general plans:


Well that is it, I have not even tried to tally the points yet, but I suspect there is 1500 points in the above list.