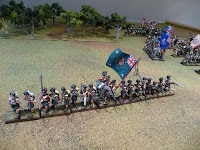 The 79th in line and square, this is a big unit with 18 figures and was in the second brigade of the first division commanded by Major-General Nightingall of Wellington's army at Fuentes de Oñoro. 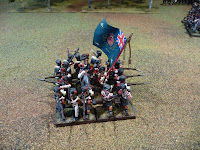 The 42nd, The Royal Highland was also in the 1st Division, 2nd brigade. This units has 11 figures representing 390 men at the Battle of Fuentes de Oñoro. You can just see that the drummer is wearing a red kilt, the Royal Stewart tartan. In the Battle from Corunna, there were 620 men in the 42nd. 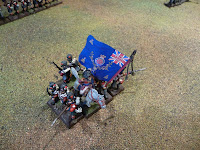 The Black Watch also served in Egypt in 1801 (see the sphinx on the regimental colours. They were sent to the Netherlands during the ill fated Walcheren expedition. There kilt is the government sett with a red overstripe. The drummer however wore a red kilt (the Royal Stewart pattern)
Posted by john de terre neuve at 18:56