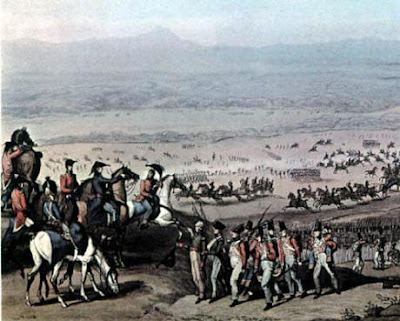 Masséna had followed the British back to Lisbon the previous year, until arriving before the Lines of Torres Vedras. He determined against storming this extensive double line of interlocking fortifications. After starving outside Lisbon through a miserable winter, the French withdrew to the Spanish border with the British-Portuguese army following them.
Having secured Portugal, Wellington set about re-taking the fortified frontier cities of Almeida, Badajoz and Ciudad Rodrigo. Whilst Wellington besieged Almeida, Masséna reformed his battered army and marched to relieve the French garrison in the city. Wellington chose to check the relief attempt at the small village of Fuentes de Oñoro. Wellington left his line of retreat exposed in order to cover all routes to Almeida: he felt this risk was justified because the French would not have more than a few days supplies whereas he had more than that. The British, Portuguese and Spanish army had 34,000 infantry, 1,850 cavalry, and 48 guns. The French had 42,000 infantry, 4,500 cavalry and 38 guns.
Organization

On the 3rd of May, Masséna launched a frontal assault against the British pickets holding the barricaded village, while subjecting the British on the heights east of the village to a heavy artillery bombardment. The village was the centre of the fighting for the whole day, with French soldiers of Ferey's and Marchand's divisions clashing with the British redcoats of the 1st and 3rd Divisions.
At first, the French drove the British back under immense pressure, but a charge that included men of the 71st Highland Light Infantry reclaimed the streets and buildings lost earlier in the day. As the sun sank, the French withdrew and the village remained in British hands. The French had lost 650 casualties against only 250 British losses.
May 4 saw little combat. Both sides recovered from the ferocity of the previous day of fighting and reconsidered their options and battle plans. A French reconnaissance revealed that Wellington's right flank was weakly held by a unit of partisans near the hamlet of Pozo Bello.
Action began again at dawn on the 5th of May. Wellington had left the 7th Division exposed on his right flank. Masséna launched a heavy attack on the weak British flank, led by Montbrun's dragoons and supported by the infantry divisions of Marchand, Mermet and Solignac. Right away, two 7th Division battalions were roughed up by French light cavalry. This compelled Wellington to send reinforcements to save the 7th Division from annihilation. This was only achieved by the efforts of the Light Division and the British and King's German Legion cavalry.
Masséna, however, still aimed primarily at securing Fuentes de Oñoro. He sent forward massed columns of infantry from Ferey's division. The village, filled with low stone walls, provided excellent cover for the British line infantry and skirmishers, while the French were severely restricted in the little streets. At first, the French had some success, wiping out two companies of the 79th Highland Regiment and killing the regiment's commander, Lieut-Colonel Philips Cameron. But a counterattack chased Ferey's men out of the town.
Drouet launched a second attack on the town. This time it was led by three battalions of converged grenadiers from IX Corps. With their old-fashioned bearskin hats, the grenadiers were mistaken for the Imperial Guard. Again, the British fell back. Drouet threw in about half of the battalions from both Conroux and Claparède's divisions, seizing almost the entire town.
In response, Wellington counterattacked with units from the 1st and 3rd Divisions, plus the Portuguese 6th Caçadores. Led by the 88th Connaught Rangers Foot, this effort broke Drouet's attack and the tide began to turn. Low on ammunition, the French had to resort to the bayonet in a futile attempt to drive the British back. One party of 100 grenadiers was trapped in a tight spot and slaughtered to a man. Facing murderous volleys, the French halted and turned, being shot at as they withdrew, leaving their casualties behind. By sunset, French morale had plummeted and many companies were down to 40% strength.
On the threatened British right flank, the elite Light Division, well supported by British cavalry and artillery, made a textbook fighting withdrawal. For trifling casualties, they covered the retreat of the 7th Division and fell back into a stronger position selected by Wellington. During the retreat, whenever French artillery ventured too close, the British cavalry charged or feinted a charge. This allowed the infantry time to retreat out of range. If the French horsemen pressed the outnumbered British cavalry back, the British infantry formed square and their volleys drove off the French. When Montbrun called on the Imperial Guard cavalry for help, Bessières refused to commit his Horse Grenadiers, Lancers and Chasseurs to the attack.
This was a classic case of a combined arms force being able to fend off superior numbers of cavalry. Two incidents spoiled this otherwise fine accomplishment. One occurred when a British 14th Light Dragoon squadron pressed home a frontal attack on a French artillery battery and was mauled. In the second case, French cavalry caught some companies of the 3rd Foot Guards in skirmish order and inflicted 100 casualties.
The French artillery tried to bombard the new British line into submission, but they were outgunned by Wellington's cannon. Finally, with their artillery ammunition dangerously low, the French attacks came to an end. Wellington's men entrenched during the evening. After spending the next three days parading before the British position, Masséna gave up the attempt and withdrew.

Wellington had repelled the Army of Portugal, inflicted a great number of casualties (the number varies according to different sources from 2,200 to 3,500) for the loss of just 1,500, and was able to continue his blockade of Almeida. Another historian says there were 1,800 British and 2,800 French losses. Wellington however acknowledged how dangerous the situation had been, saying later, "If Boney had been there, we should have been beat." Wellington did not mark the battle as a victory. He considered that he had unnecessarily extended his line too far, putting the 7th and Light Divisions in danger.
Two nights after Masséna's withdrawal, General Brennier's 1,400-man French garrison of Almeida slipped through the British lines during the night. About 360 of the French were captured, but the rest got away when their British pursuers ran into a French ambush. This fiasco was blamed on Erskine and others. An infuriated Wellington wrote, "I have never been so much distressed by any military event as by the escape of even a man of them."
On reaching Ciudad Rodrigo, Masséna was recalled to Paris by a furious Napoleon to explain his actions (although Napoleon had issued the order to return prior to the battle). He was replaced by Marshal Auguste Marmont. Masséna set off for France with a vast sum of gold, stolen from Portugal and Spain. The defeated French marshal complained that Wellington "had not left him one black hair on his body—he had turned grey all over."
Taken from Wikipedia 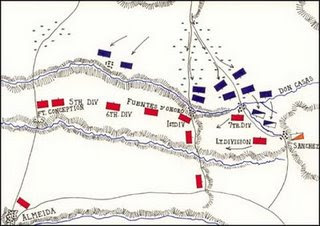