First game of 2021 yesterday, of course still virtual. We decided to have another go at Muskets and Tomahawks. I have been painting up quite a few FIW figures over the last couple of months, hoping to get a chance to photograph them today.
As usually we diced up a scenario, this time we decided on a Civilised area which required 3 buildings to be placed in the middle of the terrain, I am presently using a 3x4' mat rather than the required 4x4', as I have not had a chance to put one together. Have to get working on that soon. We decided to go with 350 point forces and dice for who was going to be the Attacker at the beginning of the game. We also decided to use intrigues! The attacker had the Massacre set up while the defender had the Battle setup. I won the throw and decided to attack with my Canadiens.
Canadiens
1 French Infantry Officer
8 man unit of Close Order Compagnie Franches de la Marine (Montreal)
8 man unit of Light Compagnie Franches de la Marine with Tomahawks (Quebec)
6 man unit of Coureurs de Bois
1 Veteran Warrior Sachem (error, need 12 men for an officer of same type)
6 man unit of Veteran, Blood Thirsty Warriors
British
1 Provincial Officer
12 man unit of Light Provincials
8 man unit of Formed Elite British Infantry
8 man unit of Elite Sharpshooter Rangers
6 man unit Veteran, Blood Thirsty Warrior Braves
It was a quick game, maybe a little less than 2 hours. As you can see from above, P-Y was pretty savvy in putting together his force. He of course got 5 sets of cards to my 3 which is always a plus. He also set up his force that he could activate almost all his units with the En Avant card. We both went for larger units than in our last game to prevent the -3 on reaction tests.
I actually did not play the best of games, I had a plan and should of stuck to it. At the beginning of the game P-Y put all his civilians (my goal was to kill them) in the log cabin to the south. I had read about burning buildings before the game and then completely forgot about doing it. I also planned to send my too tough HtH units, the Indians and the Milice Canadien from the north to distract the British while using my Compagnie Franches de la Marines to provide fire. Just did not go that way. I put in all my troops in the southeast except the Indians and never even got the CdB or the Quebec unit of CFdM into the fight. I also put my Indians in the east! My formed Montreal unit of CFdM did lay some fire power down but really spend too much time dodging the Rangers. They and the Indians were able to tie up the Provincials but that was about it. The formed CFdM were taken out by the Iroquois but then were taken out by my Algonquins in multiple HtH encounters. But by then I had lost 12 figures to 9 for the British including an Officer so the game was over.
I got to say, I really like this game. It is quite challenging and a ton of fun and I am looking forward to the next game. And best of all, I think I have convinced my old FIW adversary Iannick, to try some Virtual Wargaming. 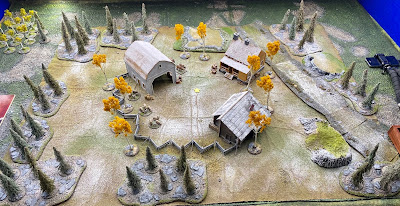 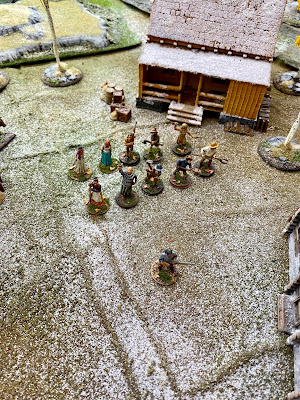 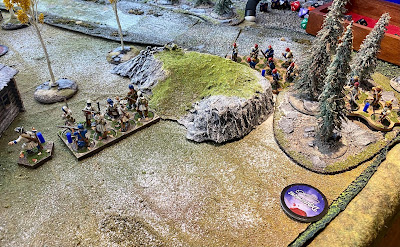 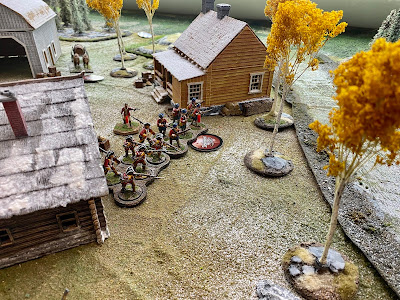 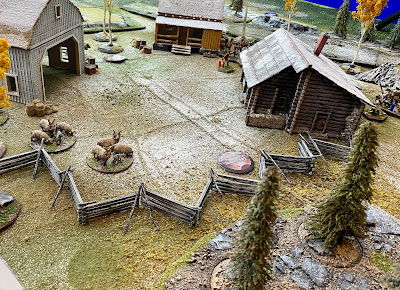 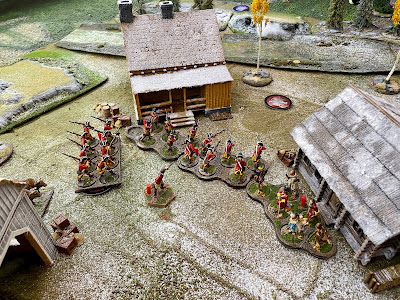 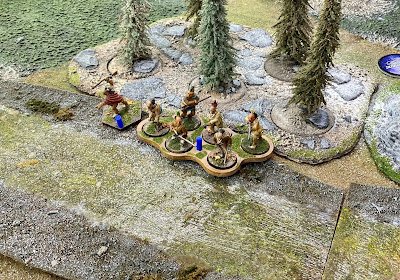 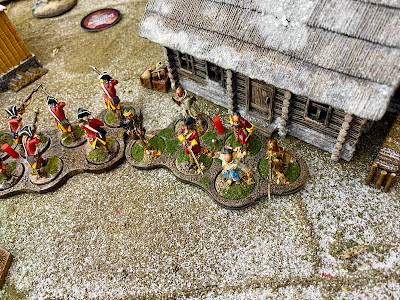 Next week I believe we are going to play some Chain of Command in jungle, should be fun. I also have my big CoC game with the Finns in their Drive on Minsk campaign, I am a Soviet Tank Commander.
Posted by john de terre neuve at 10:51