Some Terrain for Epic: AHPCX #8 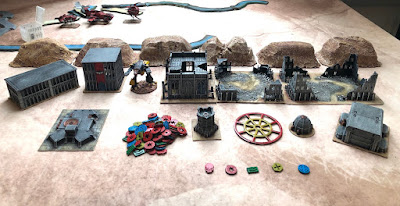 Myself and Iannick are planning to have our first 30k Epic game in three weeks, I have never played before and I do not think that Iannick has played Epic Armageddon since he was a young lad.  We are planning to use 2000 +/- 100 point forces and are playing the NetEA rules with the Horus Heresy lists. I am playing the Blood Angels and Iannick the Emperor's Children. I believe the plan is to play on a 4x4 terrain with no spaceship's, but everything else goes. I have my list together but keeping it a secret in order to confound Iannick. as we had no terrain, I have been keeping the CR10S busy. I already have a desert mat and some hills (from Rommel) as well as some 6 mm roads and rivers which will do, I really can not imagine the 30k world being a lush, verdant one, but of course I really have no idea as I know nothing about this world! I am looking forward to getting my force on the table though and the rules themselves do not look too complicated.

Wish us luck in our game.
Posted by john de terre neuve at 15:16