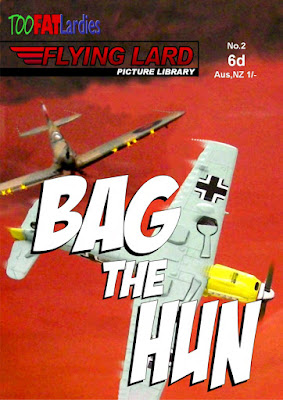 Strange Times, but Wargaming has to continue! Myself and my friend Pierre-Yves played our first wargame last night by a remote video hook-up. The set up was in Montreal while I connected to there by Google Hangouts. P-Y had a 5 camera set up which worked quite well and there was very little lag as we played the game.

We decided to play Bag the Hun, a TFL WWII aerial combat game, this was my first time playing the game and P-Y's third, it actually went very smoothly and we both had a good time. We played the starter scenario from the book which utilized a single section of 4 planes aside, I had 4 Me-109's and P-Y had 4 Spitfires. 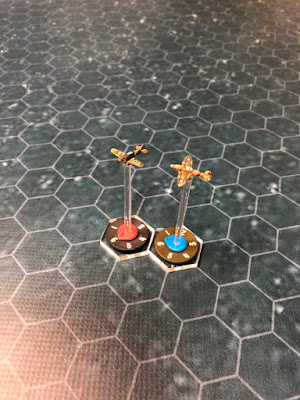 I really liked the game, it was relatively easy and fun to play, it is slightly chart heavy but I actually felt like I was a Schwarmfurhrer, leading his 4 Me-109's. I really got a sense of maneuver from the game.I really have to thank P-Y, it was a lot of work for him moving the planes etc but I believe he had fun as well.

In respect to the video set up, it went well, the only thing I had difficulty with was seeing the actual direction of the planes, I think P-Y is going to slightly modify the flight stands. I am trying to download OBS on my computer so I can add a remote camera showing my dice box...I threw my own dice but it would have been more dramatic if my opponent could directly see the throw as it happened. I think P-Y is planning a campaign so more to come. The game itself where there is a simple terrain with hexes, lead itself well to long distance gaming.
Posted by john de terre neuve at 15:47