Bloody Bucket: The Start of a New CoC Campaign 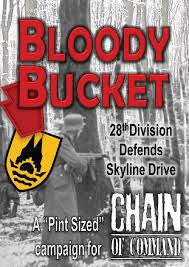 We finally got to start a new CoC campaign today, this one tracing the exploits of the American 28th Division in their defence against a late war German Blitzkrieg into Belgium in December of 1944.

This campaign will see me play the Americans against Tom's Volksgrenadiers. It is quite a complex campaign with both sides having to make a choice between several options in respect to both line of attack as well as support placement. We both have suitable forces but Tom still wants to paint up some more StG44 armed Sturmtroopers so we decided to play at my place in 20mm. This is the first time my Winter-uniformed Germans and American will see the table so it was quite exciting for me to get things going.

Essentially we find the Germans on the offensive in an attempt to capture Bastogne in the early part of the Ardennes offensive. They field a Volksgrenadier force which can be either a Sturm or Rifle Platoon while the American defend with a standard Rifle Platoon. The German force is green but are led by experienced officers and NCO's and the Americans field a regular force.

I had to make a lot of choices prior to the start of the game which I can not really elaborate on as I do not want to give away my campaign plans to Tom but I did have to pick out 48 points of support before the campaign even started and place them at 6 possible points on the battlefield.

As you can see it is pretty important which supports I select and where I place them, all of which I had to decide before the campaign starts. I do get additional supports each campaign turn but they are coming from the west so start on table 6. I can move forces each campaign turn from one adjacent table to the next but it is possible that they can be interdicted by the Germans with the possibility of it being destroyed. The Germans get 12 points of support each time they attack and 15 points if it is their 2nd go at the same table. The Germans can also choose if they have a strong enough force after a Victory to immediately Blitzkrieg the next table before any campaign calculations are made.
So the campaign turn 2 started with the Germans attacking table 1 as laid out below, this is the standard Attack and Defend scenario from the main rulebook. 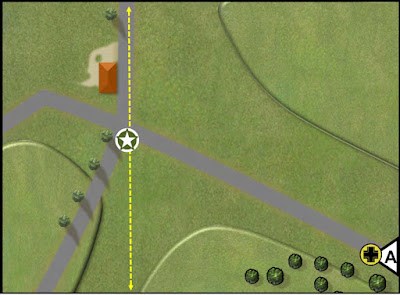 So on to the photos of which I took very few. They really are not going to tell the story but it was as follows:

Tom's plan was to assault me from my right flank starting off from the forest. He rapidly placed 2 rifle squads in the forest as well as his LMG squad. They all went down in overwatch. I was cautious and did not plan to place any soldiers on the table until Tom started his advance. Tom brought on his Sturm squad and started to advance tactically on my right. Here I got lucky as although I was under a pregame barrage, I was able to rapidly get down my 30 cal MMG and then my 50 cal HMG, with which I was able to deal with the Sturm squad pretty quickly. I was pretty lucky with my hit dice while Tom was equally unlucky with his save dice. With my 50 cal HMG, I was able to pound away at the troops in the forest as it reduces cover. It got a little tricky as Tom was able to pin my 30 cal MMG but by then I had a Rifle squad in the building and they were able to unload quite a few hits on the VG's in the forest. We banged pack and forth, I was able to destroy the LMG squad and by now Tom's FM was plummeting. I could see he was planning to withdraw so I dropped a second rifle squad in the open and was able to drive the VG force off the table. Final FM for the Americans was 11 while the Germans dropped to 3. A clear American victory!

So that was the first battle in which I suspect will be a terrific campaign. Tom has elected to make a second attack in this campaign turn. He can attack either Table 2 or 3 from point B. Let's hope I have moved my supports well.