A Flight into Fantasy 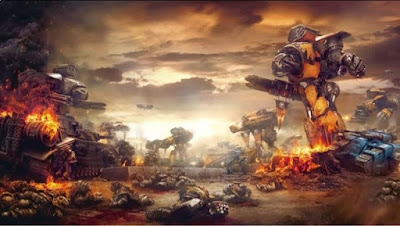 This year's AHPC for some reason or another has caused me to go off on a tangent. One would think that from reading my previous blogpost that I would have learned something, especially with 6mm. But no that is not the case. Fortunately, aside from time, the cost was little for this project. Among the many beautiful submissions to this year's challenge were these little figures which were used in some far in the future fantasy setting. I really liked the little vehicles, some blue, some white and some purple.

They looked cool and I had a vague idea that they had something to do with Games Workshop but that was about it. In a recent visit to Iannick's for some gaming, I had a chance to look closer at tiny figures in purple in his painting room. Iannick is really quiet an excellent painter, his figures are always carefully and well painted and he really does a superb job on basing. I was immediately taken with the idea of painting some myself.

I kept quiet hoping it would pass but I could not get the idea out of my head. I then starting emailing Iannick multiple times each day and over a couple of weeks he very patiently explained Epic 30K to me. Now I have to admit, I still have no idea what the whole thing is about, I know it has something to do with a dystopian future. I know it is in the Warhammer 40K world and that it is it. I am unlikely to read any of the books, of which I understand there are several.

But I have to say despite all this, I really enjoyed researching the army lists, putting together the OB and painting the figures. I have to say an enormous thanks to Iannick who was very patient with my questions; directing me to the source material, correcting my mistakes and instructing me in the basing of the army.

I wanted a red army, and it had to be a Loyalist faction in the Horus Heresy as Iannick's IIIrd Legion, the Emperor's Children is a Traitor faction. A quick flick through the lists and I was left with the IXth Legion, the Blood Angels. So it started, a quick trip to eBay provided me with an adequate number of figures to start things up. Further arduous research through the internet and looking at many photos of epic armies left me with a painting scheme and off I went.

So anyway, I got painting and made an initial submission to the challenge. This was my first line detachment with it's three supports. This first grouping, based around a Legion Tactical Detachment was 975 points of a planned 3000+ point core force.
I got a favourable response and since have painted up a second detachment, this one being based on a Legion Terminator Detachment. This will be 1170 points. The third planned detachment will be based around a Legion Assault Marine Detachment.
It was amazing to me, how much time I spent on each of these units. Generally they have been primed red with Citadel Air Evil Sunz Scarlet, followed by a Nuln Oil wash, this was applied quite heavily. I then dry brushed the figure with Wild Rider Red (subsequently since I am transiting to Vallejo, I used VMC 909 Vermillion). I use VMC 801 Brass for the gold and Vallejo 790 Silver (this is an alcohol based paint and is just terrific). Once the metals were applied they would be again washed with Nuln Oil. I tried several other formulae, but I felt this was the best. So let's look at the units.

For each Legion Detachment you are allowed to select 4 supports, you can also do some upgrades. So far I have used what I had on hand from my original eBay purchase, I am hoping my third detachment will be a little more interesting in it's composition. 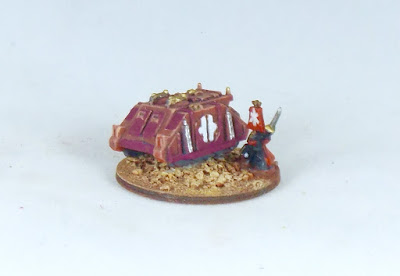 Well that is it, these are certainly fun to paint aside from the little men which I find really boring. Stay tuned for more.