I started putting this terrain together about 6 months ago, it certainly is the biggest terrain project I have taken on and the most difficult. I really am not a big planner, I wanted something that I could use for an early pacific island campaign (Guadalcanal) and also something maybe in Malaya in case I wanted to paint up some Australians. Aside from that general want, there was no plan. I see a piece of terrain and say that will work and I then have to fit it in.

I had a general sense that I wanted a beach, a jungle and something to attack. I knew that unlike Normandy or Finland this would have to be very dense. Line of sight would be continuously blocked, but I wanted winding pathways through the jungle. I also wanted lots of different types of terrain. Chain of Command is a terrific game and it caters well to varying terrain.  The TFL 2015 Xmas Special had a superb Malaya campaign. The author Len Tracey had done a fantastic job of putting together some special rules for fighting in jungles. Terrain types included were primary and secondary jungle, kunai grass, bamboo copses, swamps, plantations and jungle huts. For each of these types of terrain, he defines movement and LOS, as well as cover. This information gave me a general outline for planning as I went along. 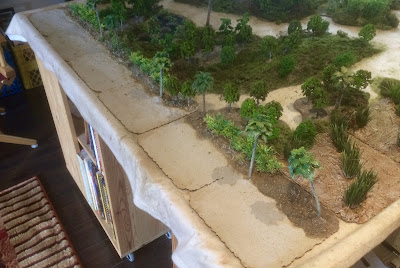 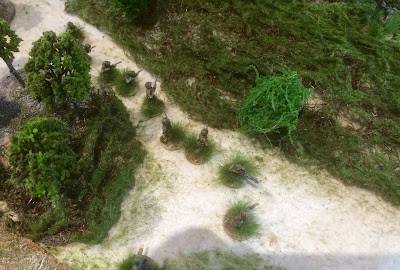 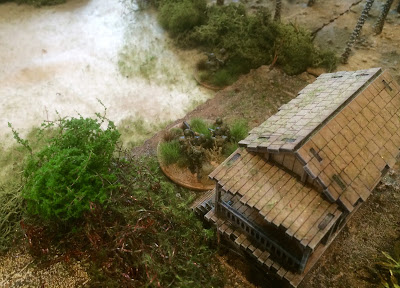 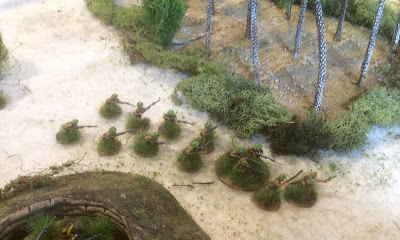 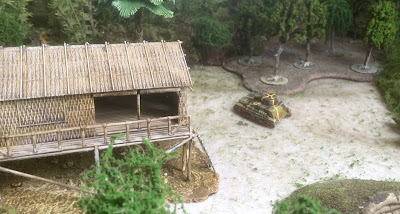 Well this was a lot of work, but I am happy how it came out. I still have to decide how I am going to terrain the paths, I will probably just lay down some reddish sand. Still have 2 more sections each of USMC and Japanese to paint as well.
Posted by john de terre neuve at 15:31