Getting Ready for Sharp Practice 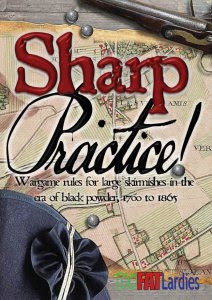 Three posts in 3 days, a record I believe! I have been looking forward to the release of this ruleset. I had never played Sharp Practice 1, it sounded a little iffy and complicated but Sharp Practice 2 sounded like just the thing. From what I understand from those who know better than me, it is a revolution from the initial version taking much from Chain of Command and Dux Britanniarum for this complete rewrite.

Hopefully I will get in a game within the next couple of weeks and in preparation for the same I have been realigning my French Indian War forces to play the game. I already had put a British force together for Muskets and Tomahawks and after a look through the rulebook I felt it best to put a late (1756) British Regulars force together. I needed to paint only 6 more British infantry and 6 more Indians to field this unit of 3 Status II leaders, 1 Status I leaders, 2 units of 8 British Infantry, 1 unit of 6 Colonial Rangers as well as an Indian force of 12 figures. I have figures to supplement this force with 2 more units of Colonial Rangers as well as a 10 figure unit of Colonial Militia.

Like Chain of Command, there is support lists that include artillery, priests, musicians, standard bearers, water carts, ammunition carts, engineers etc etc. In anticipation of this, I also acquired some carts from Warbases UK, as well as some sabots. Over the last couple of weeks I have painted up these additional figures and carts.
I am really impressed with the carts from Warbases, easy to put together and look quite good for something made out of mdf. They really are a first class company. Well priced (especially now with the plunge in sterling), rapid delivery and brilliant over all service.

Well that will be it for a while.
Posted by john de terre neuve at 10:32