Well here is the first of my 3 planned submissions of my Cunning Plan: GW Figures from the Hobbit.  Here we have 39 goblins. Why cunning you ask, well I thought that I could throw these together at a rate of less then 10 minutes a figure. So 195 points in 6 hours, I thought that was clever. This was my 11th submission to the challenge.

My initial plan was to prime white, followed by an immediate dip of very slightly red tinged AP soft tone (minimal pigment). I would then paint the loin clothe, weapons and eyes and that would be it.

Never happened. The mistake is to think and research about things and not go with your gut. Well I googled painting goblins from hobbit and got this as the top hit. Seemed easy enough, quite a few steps, but they are very nice figures and I wanted to do a good job. Well I should have realised, I am just not that good a painter, layering escapes me as I really can not be bothered. It went well until the step after the application of the Citadel Dry Eldar Flesh (if you have not tried these paints take a look, I have never seen anything like them). I just had a difficult time getting the figures back to white as I wanted. I eventually almost got there with another dry paint Praxtis White, but I still feel that they could be whiter.

By now I had well over 30 minutes plus per figure in, and that is really my limit, so I stopped. Not so cunning after all, but I am generally happy with them and they are great figures. 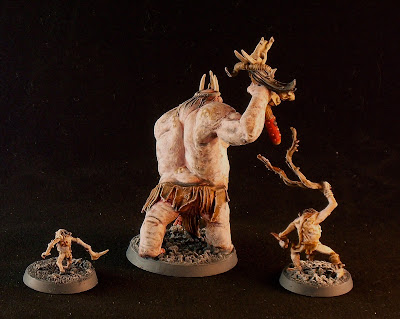