I have been trying to paint the up the Hanoverian-British division of Walmoden's Korps at the Battle of Gohrde 1813. This is a pretty obscure unit and it is quite difficult to find information about the uniforms and to source figures. I decided to go with some Perry Hanoverians, although I know these are for their 1815 line. The uniforms would have changed significantly over this period of time, but what of it and I can use them maybe for some Waterloo project in the future.
To be fair though, I said I would trace back the 1815 units to their parent units as they were formed from 1813 onwards. This ended up being a pretty obscure area of scholarship. After several hours on the net and looking through some books I have, the following table evolved:

I used a number of references as note above. I have the Osprey Men at Arms 206 on the Hanoverian army and that is where I got some of my basic information for 1813, I also had researched the OB for the Battle of Gohrde in an earlier post. I also used some references from the following links as listed above: the Napoleonic Series, Gen de Brigade forum, a nice clickable reference to the Battle of Waterloo OOB, the Mont St Jean site and this pamphlet by WJ Rawkins. I also used Siborne's well known uniform table as follows, although there is some debate about it's accuracy. 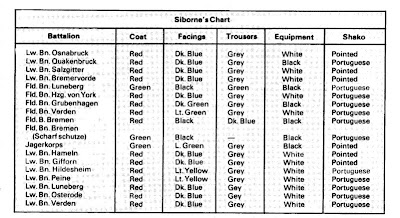