There we are, finally. The corps as it was at the Battle of Fuentes de Oñoro. There are around 375 standing figures, 11 mounted regimental colonels, 8 cavalry figures, 3 cannon, and 11 mounted command figures. The ratio is just over 40 men to 1 figure , thus representing over 17,000 soldiers. They represent 34 infantry battalions, a cavalry brigade and 3 divisional batteries. The corps takes up 18"x30" on the terrain.
Maréchal Massena, followed by le général Louis Henri Loison with their ADC's. 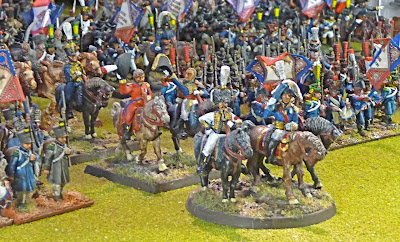