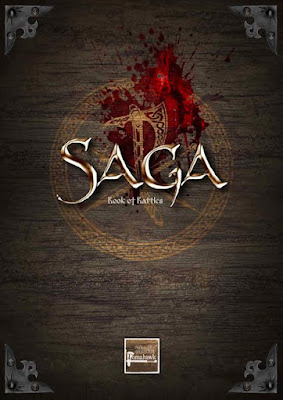 Myself and Adam finally got together last evening to try the new Book of Battles Scenario generator for SAGA2. It was our first this year due to a lot of unforseen roadblocks so we were both looking forward to it. Most of our games last fall were between my Vikings and Adam's Irish. But for this game we were both keen to try something different. Adam has just finished painting up a Norman warband and I wanted to try my Skraelings, as with SAGA2 a completely new BB has been released which looked like a lot of fun. So onto our somewhat ahistoric game!

The Book of Battles has a great skirmish game generator which we used. We opted to go Chaos, which means on all 5 atributes we threw a d6 to randomly generate the condition. We ended up with the following.
Scenery: Marshy Country
Deployment: Meeting Encounter
Game Length: Cautious
Special Rule: Forced March-which we seemed to forget to do
Victory Conditions: Sacrifice

As usual, I forgot to take photos, I think Adam took a couple which I may add but the below photo gives one an idea of the layout and battle.
It took us a little over 90 minutes to play the game, despite not having played for a while the SAGA2 rules appear to be well embedded now. We had a good game which appeared pretty equal until near the end. We were both cautious as we were learning our new BB's. I also believe Lady Luck favoured me as my dice were quite good.

On turn 4, Adam sent in his Warlord to take out my Warriors (those between the marsh and the forest). I was able to survive and the Norman Warlord was exhausted (the Skraeling ability of Agility is really useful in battles were armour is unequal).

In turn 5, I launched a bunch of arrows from my Levy across the marsh and as well as some javelins from my surviving Warriors which took down all the Norman Hearthguard. I brought in my Warlord and all there was left was the crying. The final score was 16 Massacre points for the Skraelings to 10 for the Normans. A clear Skraeling victory.

I should note that the Skraelings have a really neat and unique SAGA mechanism of Totems which can be assigned permanently to a unit for the full game after paying the requisite cost in SAGA dice. You can also temporarily assign a Totem to a unit for 1 turn at the cost of 3 unique SAGA dice (Pocession). Adam made me some very nice Totem markers which were much appreciated.

We both really enjoyed the new scenario book and are hoping to get in another game next week.
Posted by john de terre neuve at 11:19